As head of the Quds Force, Soleimani was one of the most powerful Iranian regime figures and arguably the individual most responsible for the destruction, destabilization, and inflammation of sectarian tensions that Iran has sown throughout the Middle East in pursuit of regional domination

Major General Qassem Soleimani arose from humble origins to become the commander of Iran’s elite Quds Force, the external expeditionary wing of the Islamic Revolutionary Guard Corps (IRGC) that oversees and carries out intelligence operations, terrorist plots, and unconventional warfare outside of Iran. The Quds Force, whose name refers to Iran’s desire to liberate al-Quds (Jerusalem) from Israeli control, is primarily tasked with spearheading the export of Iran’s Islamic Revolution throughout the Middle East and coordinating the activities of the loyal terrorist proxies and militias that Iran has cultivated around the region.

Soleimani was killed on January 3, 2020, in a U.S. airstrike near Baghdad International Airport. Kata’ib Hezbollah leader Jamal Jaafar Ibrahimi, a.k.a. Abu Mahdi al-Mohandes, who was traveling in a convoy with Soleimani, was also killed in the strike. The strike was ordered because Soleimani was “actively developing plans” to attack U.S. troops and officials, according to a statement released by the U.S. Department of Defense.

The Quds Force that Soleimani helmed is the tip of the spear in Iran’s efforts to subvert American, Israeli and Western influence in the Middle East and to buttress Iran’s hegemonic ambitions. The Quds Force offers ideological, financial, and material support, as well as training, for Iranian proxies, which have enabled Iran to establish spheres of influence throughout the region, including in Iraq, Afghanistan, Syria, Lebanon, Yemen, Saudi Arabia, Bahrain, and the Palestinian territories. Through the Quds Force, Iran effectively controls a transnational foreign legion of proxy forces subservient to its foreign policy objectives and willing to operate in whichever theater Tehran orders them to.

As head of the Quds Force, Soleimani was one of the most powerful Iranian regime figures and arguably the individual most responsible for the destruction, destabilization, and inflammation of sectarian tensions that Iran has sown throughout the Middle East in pursuit of regional domination. Under Soleimani, Iran has amassed influence in a swathe of territory stretching from Afghanistan to Lebanon and Syria, creating a “Shia crescent” that functionally acts as a land bridge linking Tehran to the Mediterranean, enabling Iran to more efficiently and lethally arm its proxies. Since turning the tide of the Syrian civil war decisively in favor of its client, the Assad regime, Iran has increasingly sought to entrench itself militarily within Syria, creating a base from which to project power into the Levant and encircle and threaten Israel.

Qassem Soleimani is "The Shadow Commander" 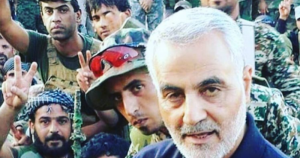 Soleimani spent much of his tenure as Quds Force commander since the late 1990s operating behind the scenes, earning him the nickname of “the Shadow Commander.” But his public profile grew considerably after taking control of overseeing the direction of Iran’s intervention in Syria in 2013, and Soleimani emerged from the shadows to become a revered figure in Iran—considered above the political fray. He was the subject of documentaries, an animated film about his life, and music videos. In March 2019, Iran’s Supreme Leader awarded Iran’s highest military order, the Order of Zulfaqar, to Soleimani, making him the first official to receive the commendation since the Islamic Republic of Iran was founded in 1979.

While revered in Iran, Soleimani was equally reviled in the West, albeit begrudgingly respected, as the architect and public face of Iran’s regional strategy. U.S. General David Petraeus, the former leader of U.S. forces in Iraq and Central Intelligence Agency Director, said of Soleimani, “We saw [him] as a very capable, charismatic, skilled, professionally competent, diabolically evil human.” The U.S. government, the United Nations, and the European Union had all placed sanctions on Soleimani. Furthermore, U.S. Central Command documents declassified in 2015 revealed that Iraqi Shiite militants under Soleimani’s command killed more than 500 U.S. service members in Iraq between 2005 and 2011. U.S. intelligence also linked Soleimani to a 2011 assassination attempt on Saudi Arabia’s ambassador to the United States in Washington, D.C.

More in this article

This resource aims to contextualize Qassem Soleimani’s role inside and outside of the Islamic Republic of Iran. It will first explore Soleimani’s biography—rising from humble origins to the pinnacle of power in Tehran. This resource will then analyze Soleimani’s modus operandi in key regional theaters— Afghanistan, Lebanon, Iraq, Syria, and Yemen. It will then discuss Soleimani’s symbolic role in Iran’s domestic politics. Lastly, the resource offers a collection of quotes from Soleimani.