Quds Day (“Jerusalem Day”), held on the last Friday of Ramadan, is an annual day of protest organized by the Iranian government against Israel.  While nominally about Jerusalem, the Quds Day rally serves as a forum for regime figures to call for hostilities against Israel and the liberation of Palestine, envisaging the inevitable elimination of the “Zionist regime.” “Death to Israel” is a common chant at the rallies, often accompanied by “Death to America. The rhetoric often slides into overt anti-Semitism including characterizations of Zionism as a cosmic evil and statements denying the Holocaust. 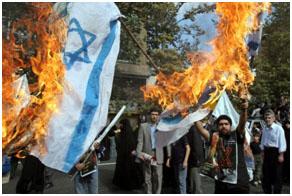 Burning Israeli flags at a Quds Day rally in Tehran

On August 7, 1979, shortly after the Islamic Revolution, Ayatollah Khomeini proclaimed Quds Day as an annual day of solidarity against the “usurper Israel.” He declared:

"I invite Muslims all over the globe to consecrate the last Friday of the holy month of Ramadan as Al-Quds Day and to proclaim the international solidarity of Muslims in support of the legitimate rights of the Muslim people of Palestine. For many years, I have been notifying the Muslims of the danger posed by the usurper Israel which today has intensified its savage attacks against the Palestinian brothers and sisters, and which, in the south of Lebanon in particular, is continually bombing Palestinian homes in the hope of crushing the Palestinian struggle. I ask all the Muslims of the world and the Muslim governments to join together to sever the hand of the usurper and its supporters. I call on the Muslims of the world to select as Al-Quds Day the last Friday in the holy month of Ramadan- which is itself a determining period and can also be the determiner of the Palestinian people’s fate- and through a ceremony demonstrating the solidarity of Muslims world-wide, announce their support for the legitimate rights of the Muslim people. I ask God Almighty for the victory of the Muslims over the infidels.”

Quds Day fits into Khomeini’s revolutionary paradigm as a show of resistance in support of “oppressed peoples” against “arrogant, oppressive powers,” and Khomeini went so far as to issue a fatwa declaring the elimination of the “Zionist entity” as a religious duty incumbent on Muslims. 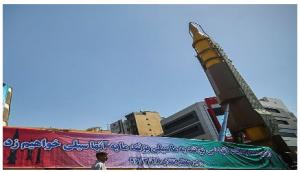 Ballistic Missile on Display During 2017 Quds Day in Tehran

Iranian politicians abidingly attend Quds Day rallies and deliver anti-Israel diatribes to showcase their steadfast commitment to the regime’s opposition to Israel. Tehran’s May 2019 Quds Day festivities were centered around Iran’s rejection of the Trump administration’s forthcoming Israeli-Palestinian peace plan, branded as “the deal of the century.” The procession featured numerous examples of incitement, including demonstrators burning American and Israeli flags and effigies of President Trump and Prime Minister Benjamin Netanyahu. In remarks to reporters, President Rouhani declared, "Palestinians will definitely emerge victorious in confrontation with the Zionist aggressors. … The issue of Deal of the Century will undoubtedly turn into the bankruptcy of the century and will certainly not yield results."

Following the rally, the participants issued a communique in which they vowed to reject negotiations and back armed “resistance” as the only viable path to advance the Palestinian national movement. The statement proclaimed, “Liberation of the al-Quds and all other Palestinian territories from the Zionist (Israel) occupation is the main goal of the Islamic world. The only way to settle the issue of Palestine is to press ahead with resistance, to allow for the return of all displaced Palestinians from around the world to their motherland, and to hold a free referendum to decide the fate of their country."

Quds Day in 2020 took place on Friday, May 22. Iran, which has been especially hard hit by the coronavirus, weighed canceling the 2020 demonstrations or moving them online. Ultimately, Iran decided to put on a modified Quds Day, which underscored that even a pandemic would not deter the Iranian regime from holding its annual display of demonization of Israel.

Ahead of the 2020 Quds Day, the Office of Iran’s Supreme Leader also released an anti-Semitic poster calling for “the final solution: resistance until referendum,” evoking Nazi-era rhetoric. The poster depicted Jerusalem following a Muslim reconquest with a poster of slain former IRGC-Quds Force commander Qassem Soleimani prominently displayed on the city’s walls. 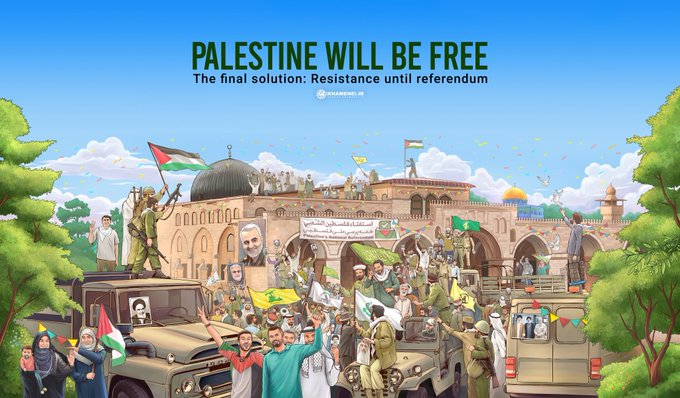 Although Quds Day events in Iran were canceled in 2021 due to the COVID-19 pandemic, the Islamic Republic’s Supreme Leader Ali Khamenei did not miss the occasion to disseminate propaganda and demonstrate his commitment to anti-Israel causes. His office frequently takes to Twitter to encourage Palestinian violence against Israel. His tweets were so horrific that the Anti-Defamation League called on Twitter to close his account for violating Twitter rules that state users will be suspended if they “glorify, celebrate, praise or condone violent crimes.” The civil rights organization asserted that Khamenei’s tweets, which have a global reach, constitute blatant anti-Semitism.

On the night before Quds Day, May 6, 2021, in a ceremony in Esfahan, Iran, IRGC Commander-in-Chief Hossein Salami touted Iran’s missile program and Iran’s readiness to act militarily against Israel. "Israel could be blown up in a single operation," he said. Furthermore, Salami mentioned attacks against Israeli interests that occurred in April and May of 2021, suggesting that they could happen again. Some of these attacks, such as the April 13th attack on an Israeli commercial vessel, have Iran’s fingerprints all over them. However, Salami did not take credit for them on behalf of Iran. This was likely to preserve plausible deniability to avoid retaliation.

On Quds Day in 2021, Khamenei emphasized in a speech that “some weak Arab governments” had undermined “Muslim unity” in normalizing ties with Israel within the Abraham Accords. He referred to the Abraham Accords as a “stab in the back to Palestine.” He also took the occasion to reiterate his call for a referendum on the “political system of Palestine.” The supreme leader tweeted that only “original residents” should be allowed to participate in the referendum and decide on the fate of “foreign settlers.” This is just one of many examples of Iran fueling anti-Israel sentiment throughout the Muslim world. Quds Day provides the opportunity for the Iranian regime to bolster its legitimacy among a segment of the global Muslim population that holds the Israeli people responsible for the oppression of Palestinians.

Amplifying anti-Israel propaganda, hackers have in the past launched cyberattacks against websites in Israel. In 2020, websites displayed a simulation of a bombing of Israeli cities and conveyed messages calling for the destruction of the Jewish state. The Israeli National Cyber Directorate issued warnings against coordinated cyberattacks from hackers around the world in 2021 and is preparing for more in 2022.

Quds Day in 2021 witnessed the escalation of hostilities between Israeli security forces and Palestinians. Tensions were already running high because the Israeli Supreme Court was deciding on a case to determine whether four Palestinian families in the East Jerusalem neighborhood of Sheikh Jarrah could be evicted from their homes. A hearing on the case was scheduled for May 10th, the day that Israelis celebrate their capture of East Jerusalem in the 1967 war. These tensions were exacerbated when Khamenei expressed his support for Palestinian militant groups that are intent on reclaiming East Jerusalem, including its Muslim, Christian, and Jewish holy sites, and establishing it as the capital of a Palestinian state. Then on Quds Day, Palestinian youths brought rocks and fireworks to their gathering at the Al-Aqsa Mosque, the third-holiest place in Islam, with which to attack the Israeli police that were present in the area to keep the peace. In response to this threat, the Israeli police raided the mosque and fired rubber bullets and stun-grenades.

The religious tensions in 2021 finally boiled over into a violent conflict between Israel and Gaza militant groups Hamas and Palestinian Islamic Jihad (PIJ), with the former carrying out airstrikes against military targets in the Gaza Strip in response to the latter’s decision to launch rockets into Israeli population centers. Iran, who supplies the terrorist organizations with weapons, instigated further escalation and threw its diplomatic weight behind the groups.

A number of terrorist attacks were committed in Israel throughout the month of Ramadan in 2022, notwithstanding the fact that Israel seems to be taking a number of measures to ease tensions. Israeli police have not set up barriers at the Damascus Gate as they did in 2021, but violence between security forces and protesters has still broken out at the gate on several occasions. Furthermore, the Supreme Court suspended a ruling on the evictions, allowing the Palestinians to stay in their homes until a dispute over property ownership is resolved; permit requirements for travel into Israel from Palestine have been eased; and Israeli security forces recently lifted the closure of the West Bank and Gaza Strip.

Nevertheless, tensions are running high given the wave of Arab terror attacks against Israelis throughout March and early April 2022, which have claimed the lives of 14 people in Israel. The Israeli army conducted a raid in the West Bank on suspects involved in a terror attack in Bnei Brak and killed Palestinian militants that opened fire on them. On Friday, April 15th, 2022, after morning prayers at the Al-Aqsa Mosque, Palestinians began throwing stones and fireworks at Israeli forces, who responded with stun grenades and tear gas.

Militants in Gaza fired rockets into Israel on April 18th, April 20th, and April 22nd. No group claimed responsibility for the rocket attacks, but the Israeli Defense Forces (IDF) suspect Hamas of initiating them. On the day of the first attacks, Ali Akbar Velayati, the foreign policy advisor of Iran’s supreme leader, reportedly spoke via phone with Hamas political bureau chief Ismail Haniyeh and Secretary General of the Palestinian Islamic Jihad Movement Ziyad al-Nakhalah. Separately, Iran’s foreign minister, Hossein Amir Abdollahian, engaged in phone calls with the leadership of Hamas and Palestinian Islamic Jihad. Israeli officials believe that a faction of Palestinian militants based in southern Lebanon were behind a rocket attack on April 25th on northern Israel. On Thursday, April 28th, the Commander-in-Chief of Iran’s IRGC, Hossein Salami, addressed Gaza via live video link from Tehran, which Axis of Resistance media hailed as the first time the IRGC commander-in-chief had done so.

Then ahead of Quds Day 2022, on Holocaust Remembrance Day, a state-controlled Iranian newspaper ran an article titled “Maybe Without War” by Mohammad Hadi Sahraei, head of the Kermanshah Basij Media Organization. In this vile article, which must have had the approval of the Kayhan newspaper’s editor, Hossein Shariatmadari, an appointee of the Supreme Leader of Iran, Sahraei declared that “with expelling these [Jewish] people from Germany… Hitler showed he is smarter than all the current leaders of Europe and he is braver in expressing himself.” The article also promotes anti-Jewish conspiracy theories and Holocaust denial. Finally, this hate-filled piece ends with threats against Israel and musings on the day that Iran will take control of Jerusalem “without war.” This culminating line is meant to be a commentary on World War II, with parallels drawn between the Holocaust and the Iranian leadership’s fantasy of expelling the Jews from Israel.

Quds Day Around the World 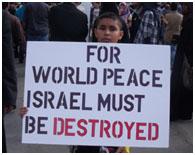 While ostensibly Quds Day’s primary focus is on the Israeli-Palestinian conflict, Iran sees this localized struggle as part of a broader global initiative. By hosting Quds Day celebrations around the world, Iran seeks to frame the Palestinian struggle as a pan-Islamic cause, and to claim the leadership mantle as the preeminent defender of the Palestinians.

Iranian-affiliated agents and entities have helped grow Quds Day internationally, organizing and financing events in over 80 countries annually, including western cities such as New York, London, Berlin, and Toronto. In addition to shows of support for the Palestinians and denunciations of Israel, displays of support for Iran and Hezbollah – including flags, and posters depicting Ayatollah Khomeini, Supreme Leader Ali Khamenei, and Hezbollah Secretary-General Hassan Nasrallah – are a staple at Quds Day events worldwide.