Playback of these sessions, and each session at its conclusion, are available on the UANI Summit website. To register for UANI Summit and access each portion of the program, please click here. 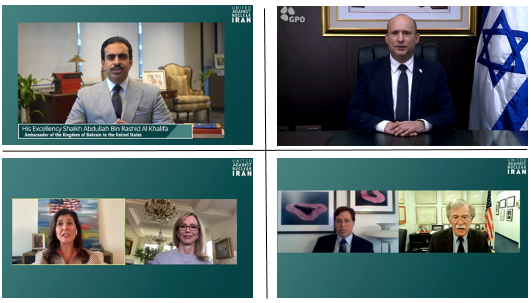 UANI Summit continues this afternoon with panel discussions and additional keynote remarks from Senators Ben Cardin, Lindsey Graham, and Robert Menendez as well as former Iranian hostages and leading experts from the U.S. and around the world on the Iranian regime and its malign behavior.

The remainder of today’s live schedule is below. All times are Eastern.

Panel Discussion | Iranian Foreign Policy Under Ebrahim Raisi: How Should the West Respond?

Panel Discussion | The Future of the JCPOA

Director of the Middle East Security Program, Center for a New American Security

President and CEO, Jewish Institute for National Security of America

Keynote Address & Panel Discussion | Iran’s Policy of Hostage Taking: The Human Cost and How to Respond

UANI CEO, Former U.S. Ambassador to the UN for Management and Reform

UANI CEO, Former U.S. Ambassador to the UN for Management and Reform