(New York, N.Y.) – Last night, UANI Advisory Board Member Nikki Haley appeared on Fox News’ Hannity to discuss the implications of the death of IRGC Quds Force Commander General Qassem Soleimani. Ambassador Haley discussed the failed Iran nuclear deal, President Trump’s decision to protect American assets and called for an end to partisan politics in relation to foreign policy. Also, on Monday, UANI Chairman Senator Joseph I. Lieberman appeared on Fox News’ Your World With Neil Cavuto, Fox Business Network’s Mornings With Maria Bartiromo and Bloomberg‘s Balance of Power to discuss his op-ed in The Wall Street Journal, which calls for bipartisan support for the decision to eliminate the leader of a designated Foreign Terrorist Organization. 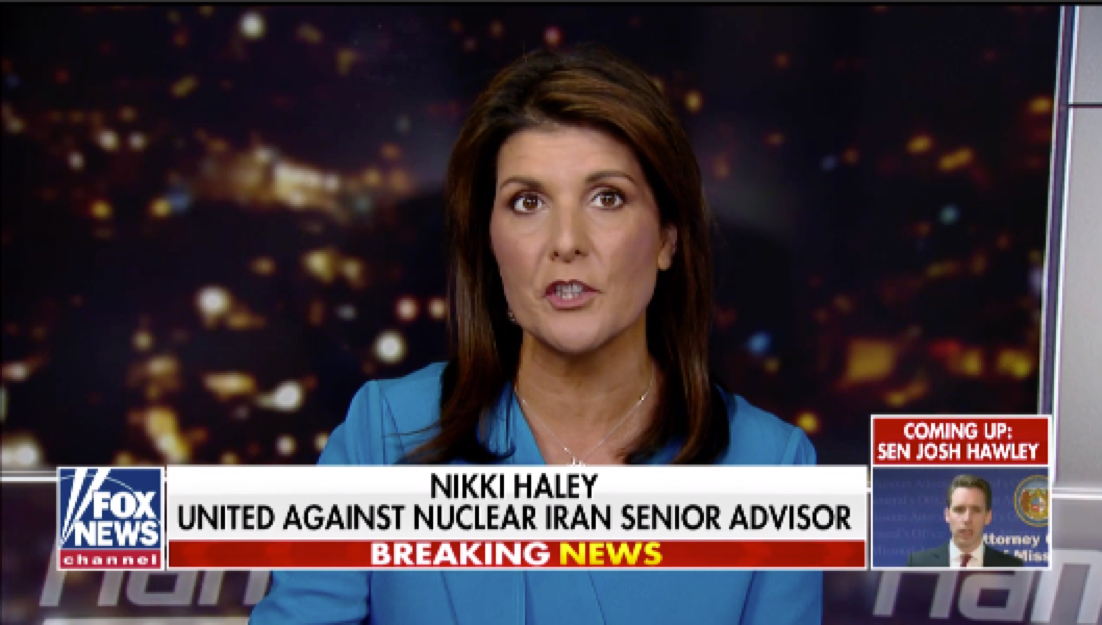 In response to the mixed opinions of the Soleimani killing and the Iran nuclear deal, Ambassador Haley said: “You tell that to the 608 American families who lost a loved one. Tell that to the military members who lost a limb. This was something that needed to be done and should be celebrated. I will tell you right now, partisan politics should stop when it comes to foreign policy. This is about America united. This is a moment of strength for The United States. … You have to look at the fact that the general provisions of the Iran deal were going to end in October. We are going towards a time where we have to bring them to the negotiating table anyway. What the president did left the Iranian regime flat footed. They didn't see this coming. They thought they could continue to do their multiple strikes.”

In regard to Soleimani’s death, in an appearance on Fox News Channel’s Your World With Neil Cavuto, Senator Lieberman said, “What he got from the U.S. which was death, he deserved for years and years of murdering Americans and our allies in the Middle East. And a lot of innocent civilians in places like Syria. There's no question that if he stayed where he was, he would have continued to murder. Here's a more basic principle pulling back. You have a great nation. We have a mighty military. Iran is an enemy. Soleimani led the actions against us.”

When asked by Maria Bartiromo of Fox Business Network about the call for bipartisanship in his recent op-ed, Senator Lieberman said, “That is the point here, that ultimately, and this is what has happened in a lot of domestic policy, now really dangerously in foreign policy you got to put America first, you got to put the country first.”

When asked on Bloomberg about Iran being stronger or weaker following Soleimani’s death, Senator Lieberman said, “Much weaker today after the attack on general Soleimani. The frame of mind of the leadership group at the top has got to be full of more fear than they did a week ago.”