Entering their 75th day, the protests, strikes, and widespread acts of civil disobedience in Iran overshadowed the World Cup match between the U.S. and Iran. Some Iranians even rooted for the U.S., hoping not to see the prestige of the Islamic Republic boosted by a victory. This is an opportunity for U.S. President Biden to make a strong and clear statement of support for the protesters in Iran.

Brooklyn-based activist journalist Masih Alinejad—whom Iran has labeled an “enemy of the state” given her outspoken condemnation of the Islamic Republic—argued in this Washington Post op-ed that world leaders have been “slow to acknowledge the full significance and depth of what is happening inside Iran.” In her view, world leaders can and should do more to support what she believes to be a revolution underway in Iran. She regards her meeting with French President Emmanuel Macron—who had shaken hands with the President of Iran Ebrahim Raisi only a few weeks before—as a powerful signal to the mullahs of Iran that external support for the revolutionary movement is growing. She extolled the fact that western powers are turning away from efforts to revive the collapsed 2015 nuclear deal, and called on President Biden to make a stronger statement in support of the Iranian protesters.

Iran’s state-affiliated Tasnim news agency said that the Iranian Football Federation will file a complaint with the FIFA Ethics Committee against the U.S. Soccer Federation for its “disrespect” of the national flag of the Islamic Republic. U.S. Soccer temporarily displayed the Islamic Republic’s flag without its symbol before taking down the post on Twitter, Instagram, and Facebook, as a show of support for the protest movement. The U.S. and Iran faced off today in the World Cup, and many Iranians were reportedly hoping for their country’s team to lose, given what they view to be an insufficient show of support for the protest movement by the players.

The Islamic Revolutionary Guard Corps’ Aerospace commander admitted that over 300 people had been killed in Iran since the protests began in mid-September, calling them “martyrs” and “the best sons of the country.” He was presumably not referring to the protesters, but rather the IRGC troops and Basij militia members, as well as the police, who have been killed. A non-governmental human rights organization published figures that are substantially higher. Over 400 people are presumed dead; and over 14,000 people arrested, including 40 foreigners.

Farideh Moradkhani, the niece of Iran’s supreme leader, is the closest member of the supreme leader’s family to have been arrested to date. Days after her arrest on November 23, 2022, her France-based brother circulated a video online of his sister calling on people around the world to pressure their governments to cut ties with the Islamic Republic over its violent suppression of protests in Iran.

Solidarity protests are set to take place worldwide at over 150 universities tomorrow. 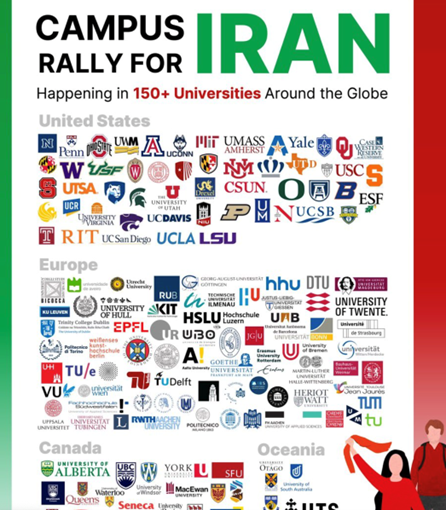