The protest movement in Iran has entered its ninth week and the call for freedom has not subsided. Supreme Leader Ayatollah Ali Khamenei is directing violence against peaceful protesters, and he ought to be held responsible for the deaths of over 400 people, and the detainment and ill-treatment of over 14,000 people. 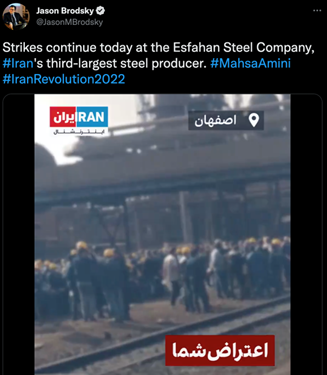 The city of Zahedan in southeast Iran saw massive street protests despite the frequent episodes of regime violence in this area since the protests began nine weeks ago. 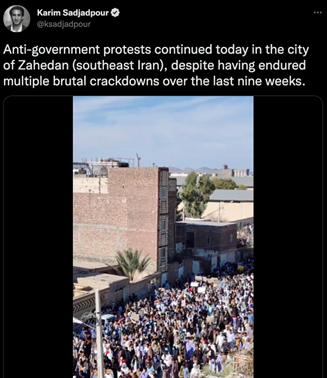 Accusing foreign powers of backing “rioters” and “thugs” and stirring up unrest inside Iran, Supreme Leader Khamenei praised the Basij volunteer paramilitary group in Iran for violently cracking down on the protest movement, which has reached 150 cities and 140 universities in all 31 provinces of Iran. Amnesty International found that the Basij was given the order to “mercilessly confront” protesters on the street.

Players on Iran’s national soccer team at the world cup sang the national anthem—unlike a few days ago when they uniformly declined—on the backdrop of protesting fans holding signs with the protest movement’s main slogan “Women, Life, Freedom” and booing the players. Qatari security personnel at the game have confronted the protesters, requiring them to take down their signs and stop their show of support for the protest movement in Iran.

Pro-regime fans at the world cup assaulted anti-regime activists outside the stadium in Qatar. Mobs of male Islamic Republic supporters surrounded protesters. In one case, security officials watched as these men smothered a girl in the Iranian flag. In another, the security officials seemed to intervene on the side of the pro-regime fans, requiring one protester to scrub the names of those who have been killed by the regime from her sign. Qatari security banned all political items from the stadium, expect for the current Iranian national flag.

Qatari security forces violently detained a protester at the World Cup for wearing a t-shirt with the pre-revolutionary flag of the lion and sun. 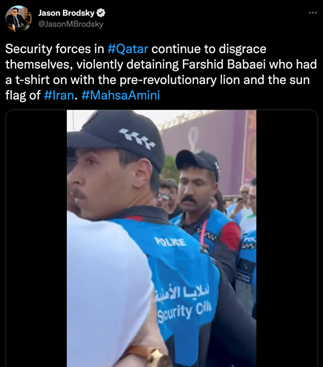 The U.N. Human Rights Council voted to set up a fact-finding mission to investigate the use of lethal force in Iran against peaceful protesters. China led the charge to remove the proposal; its ambassador argued that foreign powers do not have the right to intervene in Iran’s internal affairs. But the motion was not successful. The mission will aim to hold accountable those responsible for the use of violence. Western diplomats also said that the independent probe is a sign of support for the protest movement.

At least 42 people have been killed in the Kurdistan province of Iran in the past week alone, a major uptick in the number of deaths as the government intensifies its crackdown in these areas. The actual number of those killed is likely much higher, as accurate reporting is difficult given the internet shut down and government efforts to prevent reporting at the site of protests and crackdowns.

Armed Metropolitan Police guarded the building housing Iran International’s offices in an effort to protect its reporters amid death threats. Journalists at BBC Persia have also been threatened. While such threats were common in the past, this time they are more credible. On several occasions, individuals were spotted surveilling their intended victims. The journalists are believed to be the target of the Islamic Revolutionary Guard Corps.

Iranian authorities released a famous Kurdish football star, Voria Ghofouri, who was detained on Thursday for speaking out in support of the protest movement, as well as Hossein Ronaghi, a Wall Street Journal reporter who was detained early on in the protests. Ronaghi was reportedly subjected to torture, and he mounted a hunger strike, while in prison. He was released, according to the authorities, to be provided hospital treatment.