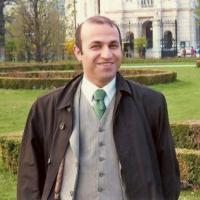 Iranian-Austrian businessman Kamran Ghaderi, a Kurd, is the CEO of Avanoc, an Austrian IT management and consulting company that has operated in Iran for many years. Ghaderi had been living with his wife and three children in Vienna at the time of his arrest.

Ghaderi was detained upon arrival in Tehran on January 2, 2016, when visiting for an official Austrian-Iranian trade meeting attended by senior Austrian officials. In response to his arrest, his wife Harika said, “everything he’s been doing is legal, he was working in Iran; it’s not forbidden.”

Ghaderi is currently being held at Tehran’s notoriously brutal Evin Prison, and was kept in solitary confinement for almost a year. He has been denied access to Austrian consular assistance and was not allowed to speak with a lawyer until two days before his trial. He was allowed to call his mother in April of 2016 for the first time since his arrest. Since then, she has been allowed to visit him in prison every other week. Harika said her husband had lost a lot of weight since his arrest. In December 2018, a report claimed that the authorities were denying him treatment for a tumor in his left leg and had not provided him the opportunity to do physical therapy to recover from surgery to relieve disc pain in his back.

The Hengaw Organization for Human Rights, which reports on violations of Iranian Kurds' human rights, claimed in December 2020 that Ghaderi had contracted COVID-19 in prison.

On October 18, 2016, Tehran Prosecutor General Abbas Jafari Dolatabadi said that Ghaderi was among six individuals who received 10-year prison sentences for spying and working with the U.S. government. According to the anonymous source, the prosecution used a coerced confession to convict Ghaderi. “They threatened him that if he didn’t cooperate, his wife would be taken into custody. They forced him to sign a confession under intimidation and psychological torture, otherwise they had nothing to convict him of espionage.” Ghaderi also stated that his interrogators lied to him, claiming that they had arrested his mother and brother and would keep them imprisoned until he agreed to make their desired confession.

Responding to the charges, his wife said, “How can they say something like that about Kamran? I don’t understand,” adding that he had no ties to the United States and was not involved in politics. She said that the family is planning to appeal the sentence.

In an open letter to Austrian Foreign Minister Alexander Schallenberg in April 2021, the families of Ghaderi and fellow Iranian-Austrian hostage Massud Mossaheb slammed Schallenberg for refusing to pressure Iran publicly to release the captives. “You do not publicly request their release, nor do you publicly acknowledge the injustice, torture and illegality of their imprisonment,” the families wrote. “After years of continuing to rely on ‘silent diplomacy,’ we interpret this either as a sign of resignation, a lack of commitment or a lack of will to consider alternative strategies.” The hostages also criticized the minister for not communicating with them for over a year. They urged him to use the April international negotiations in Vienna over the Iran nuclear deal to publicly demand that Iran free Ghaderi and Mossaheb.

Austria’s Foreign Affairs Ministry told the media that the cases of the two hostages were at the “top of our agenda” and that the ministry had raised the issue during the Vienna talks. “We have been consistently advocating for their unconditional release in all our contacts with the Iranian government at all levels. Austrian citizens imprisoned abroad are entitled to consular protection. We constantly work on obtaining improvements of prison conditions and adequate medical treatment for the persons concerned. In our efforts, we are in close touch with the families’ of the prisoners. Our ultimate goal is the prisoners’ release and to see them reunited with their families and loved ones.” In solidarity with the #FreeTheHostages campaign launched by former American hostage and UANI Senior Advisor Barry Rosen during the Vienna nuclear negotiations in 2022, Ghaderi’s wife announced that her husband would undertake a hunger strike in Evin Prison.