Iran poses a major threat to freedom of navigation and maritime security around the world. Iran uses the Islamic Revolutionary Guard Corps’ Navy (IRGCN) to challenge global economic security and the broader regional security architecture. Iran has used international shipping companies to transport illegal weaponry for the purpose of building and sustaining its terror proxy networks in the Middle East. It has also attacked commercial vessels and taken vessels hostage to extract concessions from the international community.

Notwithstanding the adoption of the Joint Comprehensive Plan of Action (JCPOA) in 2015, which Obama administration officials believed would moderate the behavior of the Iranian regime, Iran continued to violate U.S. and E.U. sanctions, and U.N. Security Council resolutions in smuggling weapons and other illicit materials to Lebanon, Syria, Yemen, and Somalia via sea. To this day, the Iranian weapons shipments continue, as do dangerous and hostile actions taken by Iranian naval vessels against international commercial ships, and the U.S. Navy and Coast Guard. In addition, the Persian Gulf has become a theater in which Iran frequently carries out unmanned aerial vehicle (UAV), mine, and missile attacks on Israeli-linked vessels. Foreign shippers, therefore, risk the safety and well-being of crew members when transiting in international waters near Iran.

Since the Trump administration withdrew from the JCPOA in 2018, the U.S. government expanded sanctions on the Iranian shipping sector. For example, on October 26, 2020, the U.S. Treasury Department sanctioned the National Iranian Tanker Company (NITC), which operates a fleet of oil tankers in coordination with and to the financial benefit of the sanctions-designated Islamic Revolutionary Guard Corps (IRGC) Quds Force. Yet, oil revenue continues to fund the IRGC’s Quds Force as well as Iranian-backed proxies throughout the region, such as the Houthis and Hezbollah.

The IRGC is not only deeply involved in the shipment of oil, but the operation of Iranian ports. IRGC-owned companies, such as Tidewater Middle East Co., operate some of the most lucrative Iranian ports, including the Shahid Rajaee Container Terminal at Bandar Abbas Port, where 1.14 million 20-foot containers were loaded and unloaded between March 21 and November 6, 2021. During that time, 20.3 million tons of oil were exported through this port. Given that the IRGC owns Tidewater, the company was sanctioned in 2011 and continues to be sanctioned by the U.S. Treasury Department.
As the layers of ownership are deliberately made endlessly complex, the IRGC has masked its involvement in the Iranian shipping sector, leading international shippers to risk paying loading, docking, and other port fees to an internationally sanctioned terrorist group. Furthermore, foreign shipping companies risk unwittingly becoming entangled in shipments of oil, weapons, or other illicit materials when they choose to do business in the Iranian shipping industry. In order to halt these shipments and revenue streams, international shippers must cease their business with Iran, and the Biden administration should sanction any entity that continues to do business in the Iranian shipping industry, in violation of U.S. sanctions.

This report documents 28 specific instances in which the IRGCN hijacked, abducted, or seized seafaring vessels on international waters; 30 interdictions of Iranian weapons or drugs at sea; 24 unsafe and unprofessional maneuvers by the IRGCN in close proximity to U.S. Navy vessels; 13 IRGCN UAV, missile, or mine attacks at sea; 14 Iran-backed Houthi attacks at sea; and other high-profile instances of Iran menacing maritime channels and exploiting the shipping industry to nefarious ends. In this report, United Against Nuclear Iran (UANI) identifies 27 shipping companies that have either been the victim of Iranian machinations at sea or were involved in shipping illicit cargo to or from Iran. Some of these companies were victimized by or provided aid to Iran on multiple occasions.

The following graph depicts on a year-by-year basis the total number of instances in which Iran threatened maritime security from 2016 to the present. It is noteworthy that vessel seizures increased markedly in 2019, the same year in which the U.S. ended the significant reduction exemptions (SREs), which allowed for certain countries to import limited amounts of Iranian oil. Moreover, Iranian maritime threats more than doubled between the final year of the Trump administration to the first year of the Biden administration. Over the Trump administration’s four years in office, there were a total of 52 incidents; compared to a total of 43 incidents in just under a year and a half since Biden took office. Such an increase in maritime threats corresponded with an increase of Iranian or Iranian-backed attacks on American ground forces stationed in the Middle East. 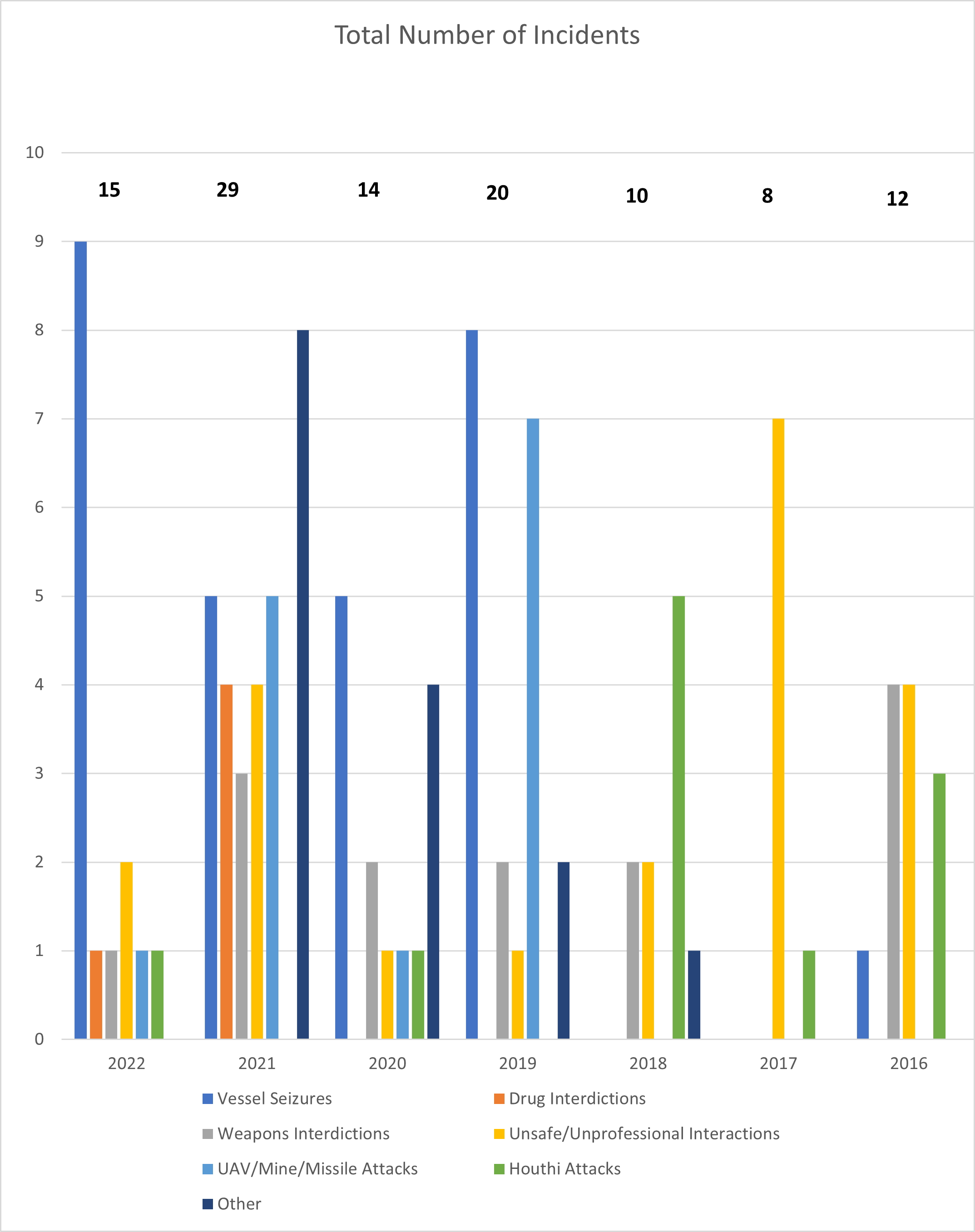