Mohammad Reza Fallahzadeh’s career has straddled both the Islamic Revolutionary Guard Corps (IRGC) and Iran’s government as a provincial governor. His service in the Quds Force has included battlefield experience in Syria, and eventually he rose to the level of deputy commander. Fallahzadeh has found himself replacing senior IRGC commanders, who outrank him in their breadth and depth of experience. This is a testament to the continued vacuum in Quds Force leadership resulting from the death of its former Commander Major General Qassem Soleimani in 2020. 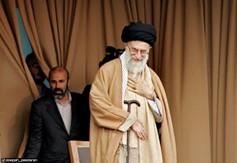 Mohammad Reza Fallahzadeh behind Ayatollah Ali Khamenei in Yazd Province during his governorship.

He later transitioned from the IRGC into Iran’s government, serving as a governor of Yazd Province during the presidential administration of Mahmoud Ahmadinejad from 2007-2013. During his presidency, many IRGC officers found themselves in governorships and ministerial roles. When he was governor, Fallahzadeh was once pictured near Iran’s supreme leader Ayatollah Ali Khamenei during one of his provincial visits. However, there is no public record of Fallahzadeh having an especially deep personal relationship with Khamenei. 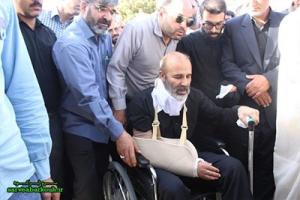 Photo of Mohammad Reza Fallahzadeh after he was injured in Syria

While governor, Fallahzadeh was quoted in media reports suggesting that the 1980 Operation Eagle Claw, which was ordered by then-President Jimmy Carter to rescue the U.S. hostages, was a “divine miracle” to protect the Islamic Republic against the United States which he dubbed “the symbol of evil.”

After his governorship, which ended as Hassan Rouhani assumed the presidency, Fallahzadeh became the chief of Karbala Roads and Urban Development, a subsidiary of the IRGC’s Khatam al-Anbia Construction Headquarters. But following an only months-long tenure, Fallahzadeh was deployed by the IRGC to Syria. In 2016, Iranian media reports suggested he was injured during his deployment there.

Accounts of Fallahzadeh’s role in Syria indicate that he held a senior-level battlefield command in the area near Aleppo. Other sources suggest he was deployed at the eastern fronts, including Deir Ezzor, al-Raqa, al-Hasekeh, and the Badiya region. Some reports place him as the IRGC’s second-in-command in the country under Soleimani with control over 18,000 non-Iranian militants, most specifically the Afghan Fatemiyoun and Pakistani Zainabiyoun Brigades. But as scholar Ali Alfoneh notes, before his transfer to Syria, “Fallahzadeh admitted that he had no previous relationship” with Soleimani, only meeting him briefly in 1984. Thus Fallahzadeh’s parachuting into a leading role in the Syria conflict was a change after holding a governorship in Yazd and spending a stint in the IRGC’s provincial commands and construction conglomerate.

Fallahzadeh participated in the 2017 International Meeting on Syrian Settlement held in Astana - a high-profile diplomatic conference. He joined then Iranian Deputy Foreign Minister for Arab Affairs Hossein Ansari as a member of the Iranian delegation. Given the leading role played by the Quds Force in determining Iran’s regional policy compared with Iran’s Foreign Ministry, Fallahzadeh’s presence was significant and increased his visibility after operating in the shadows. 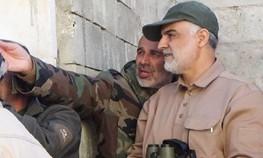 In 2018, after holding the rank of second brigadier general, Fallahzadeh was promoted to brigadier general. This coincided with his elevation as deputy coordinator of the Quds Force, which is the third highest ranking position in the entity. In this role, he had a close working relationship with Esmail Ghaani, who was the deputy commander of the Quds Force at the time.

After the death of Soleimani in 2020, the Quds Force’s top brass underwent a reshuffling. Ghaani was elevated as commander, Mohammad Hejazi became his deputy commander, and Fallahzadeh remained in his post as deputy coordinator. An April 2021 assessment from the U.S. Defense Intelligence Agency noted that Ghaani “is more likely than Soleimani to delegate responsibilities, including to his deputy Mohammad Hejazi.” This is due to the loss of Soleimani, who had a unique ability to manage, meddle, and manipulate Iran’s sprawling network of proxies and partners—including significant operational experience in the Levant. Ghaani lacked that skillset—and fluency in Arabic—as he previously focused on Iran’s eastern theater, particularly Afghanistan. Hejazi more than made up for this weakness, serving as the commander of the Basij, deputy commander-in-chief of the IRGC in its entirety, and in Lebanon prior to his position as deputy commander of the Quds Force. This likely figured into the U.S. assessment that Ghaani would delegate to Hejazi, who had more senior level experience in the IRGC.

After Hejazi died under mysterious circumstances, Fallahzadeh assumed the role of deputy commander. Fallahzadeh differs from Hejazi in that he is a more junior officer, having only held battlefield command and provincial positions, coupled with a brief stint as the Quds Force deputy coordinator. Unlike Hejazi, he never commanded a branch of the IRGC and lacked the personal relationships with the Iranian establishment that came with those positions. This therefore raises questions as to how much Ghaani will be delegating to Fallahzadeh given this gap in experience. Fallahzadeh has flown so low under the radar that unlike Ghaani and Hejazi, he still hasn’t been sanctioned by the United States. 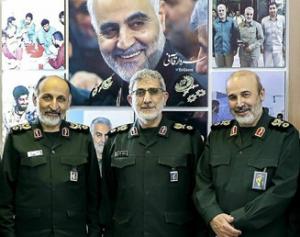 Early in Fallahzadeh’s tenure, he gave remarks warning “the usurping Zionist regime should know that resistance forces are located in different parts of the world next to your headquarters, and they are ready to bring about your downfall at any moment.” He hailed his predecessor Hejazi for being in “Syria and Lebanon for five years in complete anonymity…to wage war against God’s enemies. Without commanders…like Soleimani…and Hejazi…the world-eating America and usurping Zionist regime wouldn’t have given a chance to Islamic nations.” Fallahzadeh added “the enemies of the Islamic Revolution must know that we are inheritors of the Prophet and oppressed Imams…if they cut us to pieces and revive us several times, we will not abandon the path of Islam, and will continue our fight until the moment of Islam’s victory.”

Throughout the first year of his tenure, Fallahzadeh has held a relatively low profile. Apart from appearances at conferences, ceremonies, and related events, he has not been pictured on visits to Iran’s regional battlegrounds—particularly Lebanon, Iraq, and Syria. That has fallen to Ghaani, who has gradually raised his profile, with more photos emerging of his travels throughout the Middle East as he has grown more comfortable in his role. In 2021, Fallahzadeh was shortlisted by the Tehran City Council to be the next mayor of Tehran. However, he remained in his post as deputy commander.

Mohammad Reza Fallahzadeh’s elevation as deputy commander will automatically put him into contention as a successor to Esmail Ghaani as commander of the Quds Force. His experience in the Levant will also complement Ghaani’s lack of experience in those theaters as compared with Soleimani. But his status as a more junior officer represents a change in the dynamic Ghaani faced when Hejazi was his deputy, and thus Fallahzadeh will have more of a learning curve.