In November 2020, UANI identified 70 foreign vessels suspected of involvement in the illicit transfer of Iranian crude oil and/or petroleum products. Over two years later, the list has grown to 294. This suspected ghost armada, distinct from but complementing Iran’s own NITC tanker fleet, has skirted U.S. sanctions and exploited regulatory loopholes to ship millions of barrels of Iranian oil.

One of the most frequently deployed tactics in evading oil sanctions is “flag hopping.” This involves the repeated switching of a ship’s “flag” – which permits legitimate global travel and docking rights – to different national registries. Often accompanied by the formation of new shell and front companies, ownership and name changes, and even alterations to ships’ physical markings, flag-hopping is a blight on legitimate maritime commerce.

Certain vessel owners are intentionally exploiting flag registries, many of which do not have the capabilities to track the history of vessels or even perform what ought to be rudimentary compliance scans.  In fact, some registries are increasingly reliant on UANI for assistance in identifying the suspicious and often illicit behavior of vessels absent their own tracking capabilities and resources.

For example, in a Guardian report from March 23, 2021, the Cook Islands flag registry acknowledged to the journalist, “we just do what they [UANI] tell us.”

In conveying our findings to the world’s flag registries, a majority have taken appropriate measures and de-flagged these vessels. Others are less responsive, taking months to ‘investigate’ while allowing the vessels to engage in further illicit activity under their flag’s registration.

Of the 294 vessels listed below, 42% are currently flagged by the Panama Maritime Authority (AMP), the world’s biggest and most famous flag registry. 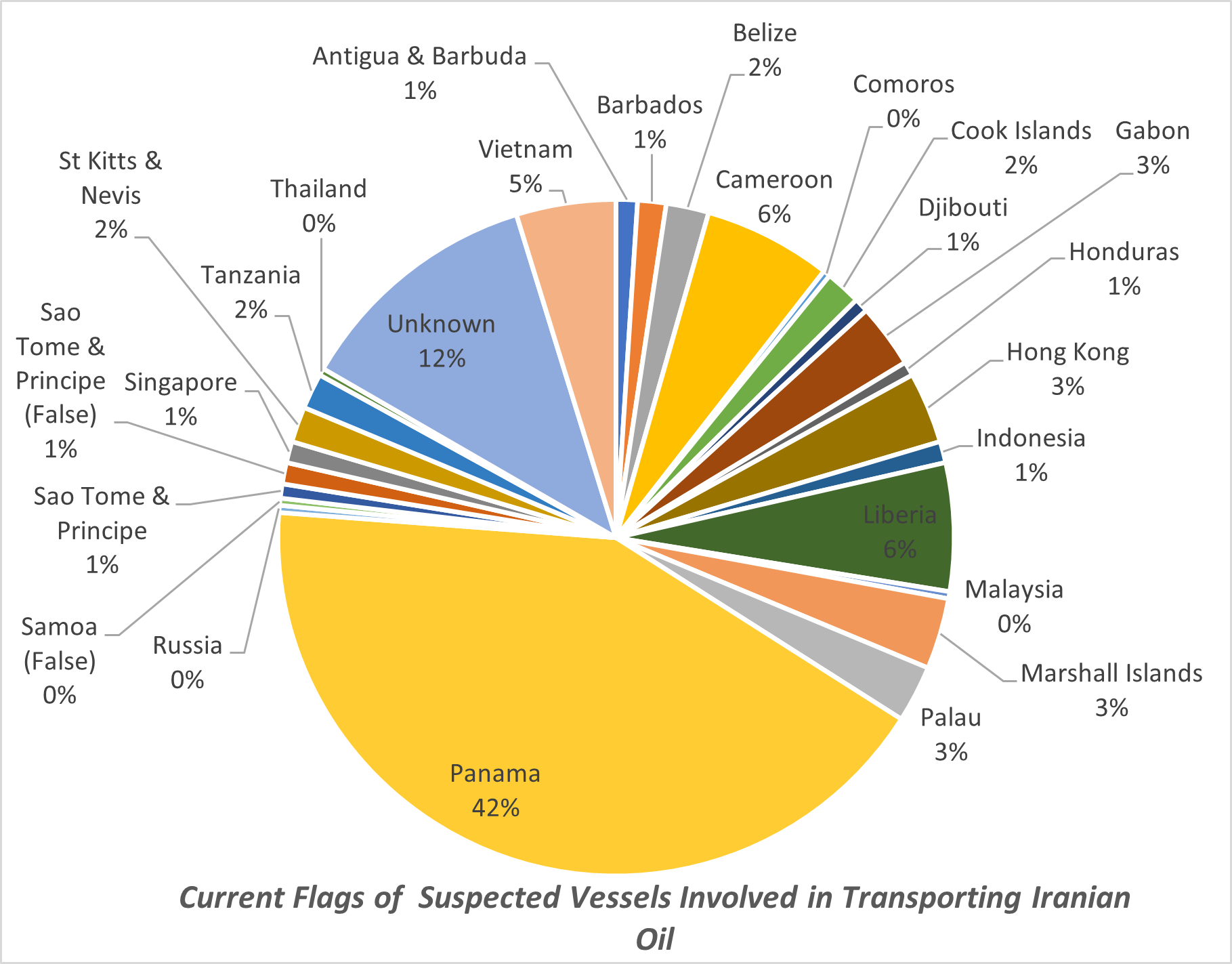 UANI first contacted AMP in August 2020.  As detailed in 50 letters since then, AMP has so far de-flagged a total of just 18 from over 124 vessels of concern.

AMP currently leads as the top flag state for 2020, with over 9,596 ships registered as of October 2020. Given this fact, it might be anticipated that AMP would be a leader in de-flagging vessels that breach sanctions or tamper with vessel-tracking systems. Indeed, AMP director-general Rafael Cigarruista has asserted that AMP is proactive on these issues.

However, UANI has serious doubts regarding the seriousness of Panama’s flag authority on these issues.

By way of illustration, we first alerted AMP to a suspected ship-to-ship (“STS”) transfer of Iranian oil with the Panama-flagged vessel BRIGHT SONIA in October 2020. BRIGHT SONIA remains flagged by Panama today:

In the following six months, from October 2020 to April 2021, the Bright Sonia is suspected to have engaged in two more STS transfers, transporting an estimated total of 2,322,203 barrels of Iranian crude oil. Taking into account the substantial discount Iran offers for crude sales, we estimate this single vessel has filled regime coffers to the tune of $91,000,000.  A big chunk of these proceeds will end up being disbursed for regime terrorist funding, Iranian proxy wars, and Iran’s malign intelligence activities. In neglecting to de-flag BRIGHT SONIA, AMP has seriously abrogated its responsibility.

On the other hand, there are many responsible authorities such as the St. Kitts and Nevis International Ship Registry (SkanReg), which have de-flagged all eight vessels identified by UANI. Other notable registries with a good track record include the Tanzania-Zanzibar International Register of Shipping, the Maritime Administration of Gabonese Republic, and the Tuvalu Ship Registry.

UANI has compiled a list of vessels suspected to have been involved in the transfer of Iranian crude oil and/or petroleum products, so that the entire community of flag registries may act in concert to “stop the hop.”

In its reply to UANI the Tuvalu Ship Registry suggested: “it is our opinion that vessel registries should make public the information they have relating to vessels and owners that seek to support the Iranian / Syrian regime just as how TSR has done. This will save time and cut out the bureaucracy of signing agreements and surely result in a more effective way of stamping out “flag-hopping”.

UANI agrees and we intend to update this list monthly. We encourage all flag states to routinely check this list to confirm whether vessels suspected of involvement in the illicit transfer of Iranian oil are seeking to register under their flags.

* Change of flag due to UANI intervention

† Vessel has been broken up

‡ Vessel was sanctioned prior to inclusion on UANI’s public list of vessels suspected of involvement in Iran. The vessel remains on UANI’s list as it is currently foreign-flagged or ship-tracking platforms have failed to update the flag to unknown.

The vessels italicized indicate that the vessel was sanctioned after inclusion on UANI’s public list of vessels suspected of involvement in the illicit transfer of Iranian oil.