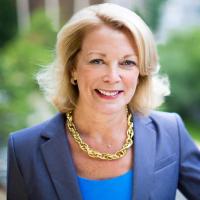 Jackie Wolcott currently serves as the U.S. Permanent Representative to the United Nations’ International Atomic Energy Agency and the U.S. Representative to the United Nations in Vienna, Austria. She was appointed as Special Envoy for Nuclear Nonproliferation at the request of the Secretary of State in February 2008. In this capacity she represented the United States with counterpart governments and U.S. industry to develop international cooperation that supports civil nuclear power expansion globally while reducing risks of nuclear proliferation, consistent with the Joint Declaration on Nuclear Energy and Nonproliferation announced by Presidents Bush and Putin in 2007. Prior to this appointment, she served since February, 2006 as U.S. Ambassador to the UN Security Council handling the full range of international security issues before the Council.

Ambassador Wolcott also was Ambassador and United States Permanent Representative to the Conference on Disarmament in Geneva and as Special Representative of the President of the United States for the Non-Proliferation of Nuclear Weapons from December 2003 through February of 2006. In the latter capacity she had lead responsibility for U.S. participation in the Nuclear Non-Proliferation Treaty (NPT) review process. Ambassador Wolcott was also accredited as U.S. Governor and head of delegation to the International Atomic Energy Agency Board of Governors in Vienna for its September 2004 through June 2005 quarterly Board meetings.

Prior to this, she served as Deputy Assistant Secretary of State in the Bureau of International Organization Affairs from 2001 to 2003, with broad responsibility for foreign policy development and multilateral negotiations within the United Nations system. She also served as Deputy Assistant Secretary of State in this same Bureau from 1990 to 1993. Ambassador Wolcott served for more than 20 years in the federal government, including nine years on Capitol Hill (Senate and House). She held several additional positions relating to national security affairs, including Associate Director for National Security in the Office of Presidential Personnel, The White House; White House Liaison for the Department of State; and Special Assistant for Congressional Affairs in the Bureau of Near Eastern and South Asian Affairs, Department of State.