"Fiat car manufacturers have purchased a plot of land in Salafchegan Special Economic Zone for their new assembly line which will begin work in the near future. The news was announced by the Managing Director of Salafchegan Special Economic Zone, who added: “The zone is ready to welcome investors from Iran and overseas in the automotive industry with very suitable capacities.” (Persia Digest, 6/19/2019).

Prior to Italian Prime Minister Matteo Renzi’s April 2016 visit to Iran with a trade delegation, Iranian economic official and head of the Iran-Italy Joint Chamber of Commerce Ahmad Pourfallah said Fiat was due to set up a joint firm with Iran Khodro, by which Fiat would purchase ownership in Iran Khodro stock. (Fars News Agency, “Italian PM to Visit Iran Next Week, Fiat to Buy Iran Khodro's Share,” 4/6/2016)

“US car manufacturing technology will be indirectly imported to Iran through cooperation with the Italian company Fiat.” (Tasnim News Agency, “Italy’s Fiat to bring American car technology to Iran: IKCO,” 2/7/2016).

“On the basis of the conducted negotiations, it has been stipulated that Fiat’s new cars will be produced in Iran and deployed to the regional countries; accordingly, joint production rather than import has been put on the agenda.” He further asserted that “new models of Fiat cars will be jointly manufactured in Iran and collaborative Iranian-Italian firms will be established with shared investments on the part of the two sides.” The Iran-Italy chamber president added, “It has been agreed that Fiat will be in charge of transferring knowledgeand information to Iran while Iran will supply human forces and energy, however the amount of investment is still under negotiation.” (Mehr News Agency , “Fiat to rival Peugeot, Volkswagen in Iran,” 2/7/2016).

"On the sidelines of an Italian-Iranian trade forum being hosted in Tehran, Iran’s Minister of Industry, Mine, and Trade Mohammad Reza Nematzadeh said Fiat has been in talks with an Iranian auto manufacturer to produce cars." (Press TV , “Fiat in talks for car manufacturing in Iran,” 11/29/2015).

"Italy's Minister of Foreign Affairs Paolo Gentiloni and Minister of Economic Development Federica Guidi will arrive in Iran on an official visit tomorrow. During their two-day trip, Gentiloni and Guidi will meet with a number of Iranian officials including Minister of Industry, Mine, and Trade Mohammad Reza Nematzadeh, according to a Shatanews report. They will be accompanied by a high-ranking delegation of Italian economic activists and representatives of various Italian firms interested in making investments in Iran. Managers and representatives of Fiat Chrysler Automobiles, Italian Exhibition and Trade Fair Association, General Confederation of Italian Industry, companies working in the field of electricity, highway construction, and road-building are among the delegation members." (Tasnim News, "Italian Ministers Due in Iran Tuesday," 8/3/15)

"Last week, Qorbani announced that Benz, Volkswagen, Volvo, Fiat, Rover, Skoda, Renault, Peugeot, Kia and Toyota would take part in the Iranian auto expo, adding that the US car-manufacturers would also join the event. 'In case of desirable conditions, General Motors and Ford companies will also attend the event.' He continued that some leading car parts makers, including Siemens, FORD Mendo, Busch, FRW and ACI would attend the gathering. The event will start work on December 10." (Fars News, "55 Giant Int'l Carmakers, Part-Makers to Participate in Iranian Auto Expo," 11/2/14)

“Fiat, the Italian carmaker would be making a big mistake if it decides to re-enter the Iranian car market, Nathan Carleton, communication director of United Against Nuclear Iran, told Trend. Carleton was commenting on Fiat voicing its interest in returning to Iran’s Iranian ambassador to Italy, Jahanbakhsh Mozaffari, told Trend on December 16 that Italy could become Iran's major partner in the car manufacturing industry. Italian carmaker Fiat signed a deal with Iran's Pars Industries Development Fund in 2008 to build a new $275 million factory with a capacity of 100,000 cars to produce Fiat Siena models in Iran. Since then, there has been very little news about the factory or about the current status of the partnership. ‘In 2012, Fiat executives told UANI and New York City's next Mayor Bill DeBlasio that they wanted to be a responsible company, and would stay out of Iran until it stopped pursuing nuclear weapons and sponsoring terrorism,’ UANI's Carleton said. ’Fiat would be going back on its word, and making a serious mistake by re-entering Iran based on just a temporary diplomatic agreement that will expire six months after being implemented,’ he added…’Iran is not re-open for business. It is still a terrorist state that has not verifiably stopped its nuclear program,’ Carleton said.” (Trend, “Fiat to make big mistake in re-entering Iranian car market - UANI,” 12/23/13)

"Iran180 Executive Director Chris DeVito announced the addition of Maserati and Lamborghini to the Iran Watch List , given that the two have entered into business agreements in Iran and have refused to renounce their Iranian ties. And in the case of Maserati, which is owned by Fiat–touted the opening of a new dealership in Tehran... So far Fiat, which owns Maserati, and Volkswagen Group, which owns Lamborghini, have not responded to The Algemeiner’s request for comment." (The Algemeiner, "Activists Call on Maserati and Lamborghini to End Business in Iran," 10/23/2012)

"Italian automaker Fiat SpA and its sister company Fiat Industrial SpA said Friday they would stop doing business in Iran in line with a trade embargo imposed by the West. 'Fiat announces that effective immediately its subsidiaries will no longer carry out business activity related to products or components where the ultimate destination of such products is known to be Iran, other than to the limited extent required to fulfill already existing binding obligations,' the company said in a statement. The Turin-based car company said in the statement that sales by Fiat’s subsidiaries were 'totally immaterial in a quantitative and qualitative sense' and that the products it sold were solely for commercial and civilian use. Fiat exports cars to Iran while Fiat Industrial exports buses and trucks under its Iveco brand... United Against Nuclear Iran, a U.S.-based pressure group, has led a spirited campaign calling for Fiat to exit the Iranian market. For the past year, the group placed advertisements in New York newspapers, and it held a protest at the New York International Auto show. 'Fiat has finally made the responsible decision to end its most egregious ties with the Iranian regime,' said Nathan Carleton, a spokesman for United Against Nuclear Iran, in an email. 'We call on Fiat to now fully end all of its business in Iran, including the sale and manufacturing of all Fiat and Maserati vehicles.'" (The Wall Street Journal, "Fiat Slams Brake On Sales To Iran," 5/25/2012)
--
"Italian automaker Fiat SpA, which controls Chrysler, said Friday that it and subsidiaries will immediately halt sales to Iran, following similar moves by other carmakers under pressure to cut ties to Tehran over its disputed nuclear program... The auto industry has been under pressure from the anti-nuclear lobby group United Against Nuclear Iran to cut off business dealings with Iran. UANI says that the global auto industry is the second-largest source of foreign currency for the Iranian government, after oil, and also a source of foreign technology. The decision by Fiat to halt sales "is a st'p in the right direction, and it shows the effectiveness of public pressure against these companies,' UANI spokesman Nathan Carleton said from New York. Fiat and heavy-truck maker Fiat Industrial SpA said in separate statements that they 'support international efforts for a diplomatic solution' regarding Iran... Most of the vehicles sold were Iveco-branded buses and trucks, and no vehicles were produced in Iran, according to Fiat. Fiat said its subsidiaries would honor binding obligations, which it described as limited, but that otherwise would halt 'all business activity related to products or components where the ultimate destination ... is known to be Iran.' Fiat said anything sold to Iran was in compliance with U.N. rules and EU and Italian laws, which require certification of the end user." (Associated Press, "Italian automaker Fiat halts sales to Iran," 5/25/2012)

"Fiat, the Italian automaker controlling U.S. group Chrysler, said on Friday it had suspended its commercial relations with Iran in a move aimed at supporting international diplomatic efforts. 'Effective immediately the subsidiaries will no longer carry out business activity related to products or components where the ultimate destination of such products is known to be Iran,' Fiat said in a statement. Separately, truck maker Fiat Industrial, which like Fiat is controlled by Italy's Agnelli family, also said it had suspended its commercial ties with Iran. Fiat and Fiat Industrial both said that their sales to Iran-based entities had been totally immaterial in recent years." (Reuters, "Fiat suspends commercial relations with Iran," 5/25/2012)

"Italian luxury sports car maker Maserati plans to open a dealership in Tehran, Iran, next year, as it expands its international network, not only to enhance its independence as a brand within Fiat SpA (F.MI) but also to tap demand from a new, wealthy elite in emerging markets. Maserati won't own the dealership, preferring to import cars to a representative, a spokeswoman for the brand said Friday, confirming a report in Il Sole 24 Ore, an Italian business daily." (Dow Jones Newswire. "Fiat's Maserati Brand To Open Dealership In Tehran," 9/2/11)

"Fiat Group Autos S.p.A. began production of its Siena four-door sedan in Iran in 2004, under a licensing agreement with Pars Industrial Development Foundation, and to date some 2000 vehicles have been produced, said company spokesman Richard Gadeselli." From 2000-2009, the company has been the recipient of $227.3 million of US federal funds.  Their activity in Iran is currently active.  (The New York Times, "Profiting from Iran, and the US," 3/6/10)

"Another example is Fiat's subsidiary Iveco. The truck maker has since the early 1990s delivered thousands of vehicles to Iran and boasts on its Web site about its joint-venture assembly line in Iran. The problem is that some of these trucks, as shown on the nearby photograph, can also be used to transport Iranian missiles. Iranian Opposition members say these trucks also serve another sinister purpose: the public hangings of homosexuals and dissidents. I have seen a photograph showing these executions on Iveco trucks at an October 2007 exhibition in Rome organized by Italy's largest organization against the death penalty, 'Nessuno tocchi Caino.' 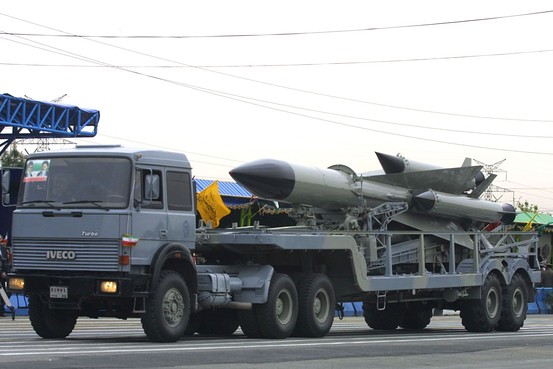 Listed by U.S. Government as doing business in Iran. (U.S. Securities and Exchange Commission, List of Companies Doing Business With State Sponsors Of Terror, Removed from the internet in July of 2007)

No response at this time.