Total Chinese imports of Iranian oil since April 2018 – the start of UANI’s Tanker Tracker resource – tells an even more dramatic story than the barrels per day (bdp) metric from the first chart in this series.

In the 16 months since Joe Biden became President, China has imported an eye-watering 406 million barrels of Iranian oil.

More worryingly still, the biggest half year total over the past four years has come in the last six months. China imported 159 million barrels from November 2021 to April 2022,. The month-to-month range over the last half year is also holding steady.  It all suggests China has no plans to reduce a growing appetite for Iranian oil any time soon.

By contrast, any six-month snapshot after President Trump’s April 2019 decision to end the grace period for oil imports will show a much lower figure. In the half year immediately following the “net zero” goal from May 2019 to October 2019 – and well before any possible COVID-19 demand-suppressant effects (which, notably, have evidently had little impact anyway since early 2021) – China imported 57 million barrels. In the next six months, from November 2019 to April 2020, China imported just 41 million barrels. 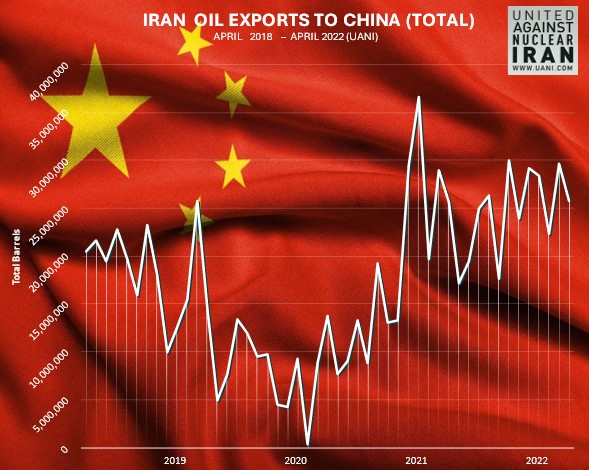 Ultimately, while U.S. sanctions on Iranian oil remain de jure in force, they are de facto non-existent.  As a result the Biden team has faced a lot of criticism for its lack of action on Chinese imports of Iranian oil.

On January 27, 2022, nine Republican Senators wrote to the President:

“The vessel owners and their customers in China are taking greater risks because they believe that your administration is too weak and indecisive to punish them for their crimes. Your unwillingness to take actions that could jeopardize the doomed Vienna nuclear talks has undeniably emboldened these criminals. Meanwhile, the boom in oil sales has refilled the Iranian regime’s once-empty coffers, removed crucial American leverage over Iran, and encouraged the Iranians to stall negotiations in Vienna and irreversibly advance their pursuit of a nuclear weapon.”

This issue has since gained bipartisan support from Democratic Senators. Most recently, on April 28, 2022, Senator James Lankford issued a Motion to Instruct (MTI) requiring “any deal with Iran to address Chinese purchases of Iranian oil.” At 62 votes, the MTI passed easily and got bipartisan support from 16 Democratic Senators.  This was a tally that even excluded several absent members who also signaled their endorsement, including the Chairman of the influential Senate Foreign Relations Committee Senator Bob Menendez (D-NJ). As AP’s Diplomatic Writer Matt Lee suggested during a State Department briefing with Spokesman Ned Price, the vote was a “pretty clear shot across the bow for the Administration.”

However, there are no indications that President Biden and his team intend to do anything about it – shown not least from Mr. Price’s equivocating response to the MTI – as they continue their quest for a return to the JCPOA.