(New York, N.Y.) — United Against Nuclear Iran (UANI) announced today the release of a new resource, Organizational Chart of the Islamic Republic of Iran, visually and comprehensively detailing the major institutions which wield power within the regime and how they interact with one another. As depicted below, both the appointed and “elected” elements of the Iranian regime derive their power and follow the decisions of the Office of the Supreme Leader and the Supreme National Security Council (SNSC).

Understanding how the Iranian regime is structured is particularly important as the Biden Administration weighs whether to rescind Executive Order 13876, which imposed sanctions on the Supreme Leader Ayatollah Ali Khamenei and the Office of the Supreme Leader, and ahead of a potential battle for succession to the now 83-year-old Khamenei. In August 2021, Khamenei loyalist Ebrahim Raisi assumed Iran’s presidency after mass disqualifications of other leading politicians by Iran’s Guardian Council. Analysts assess that this heavy-handed approach was due to Khamenei desire to ensure Raisi held the presidency during a potential leadership transition.

Each entry on the below chart contains a description of the relevant entity, an analysis of its relative power in the Iranian establishment, and a timeline of the heads of each branch of state from 1979 to the present. 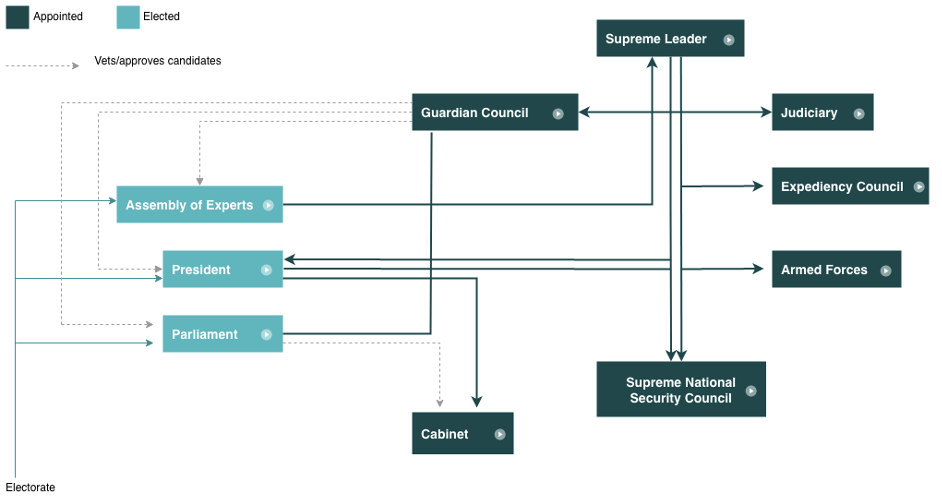 The Judiciary: Article 156 of Iran’s constitution defines the judiciary as an “independent power,” which investigates and passes judgment on grievances, violations of rights, complaints, resolves litigation, settles disputes, and takes all necessary decisions and measures in probate matters. It also supervises the proper enforcement of laws and “uncovers crimes, prosecuting, punishing, and chastising criminals; and enacting the penalties and provisions of the Islamic penal code.” Gholamhossein Mohseni-Ejei is the current chief justice.

Iran’s Cabinet: Iran’s cabinet is comprised of ministers nominated by the president and confirmed by parliament, and vice presidents who are appointed directly by the president. In practice, the cabinet retains significant managerial authority over executive departments and ministries—particularly on domestic affairs. On foreign policy, the cabinet’s role is limited. Those retaining responsibility for foreign policy files—for example the foreign minister—also have seats on the Supreme National Security Council (SNSC). The SNSC—not the cabinet—is where significant system-wide debates occur on these issues. The cabinet also gives votes of confidence in selections for provincial governors-general.

Office of the President: In theory, the presidency is often described as the second-highest official—the ultimate authority is the supreme leader—in the Islamic Republic. According to the constitution, the president is responsible for national planning, budget, and state employment affairs; has the authority to sign treaties, protocols, contracts, and agreements concluded by the Iranian government with other governments and international organizations after approval by the parliament; is required to sign legislation after it has been approved by the requisite bodies; has the authority to sign and receive the credentials of ambassadors; nominates cabinet ministers, which are subject to confirmation by the Iranian parliament; appoints vice presidents; and serves as chairman of the Supreme National Security Council (SNSC). However, in practice, other power centers in the Iranian establishment outrank the presidency in their control over state affairs, most especially the Islamic Revolutionary Guard Corps (IRGC) with respect to Iran’s regional policies.

Parliament: Iran’s parliament comprises of 290 elected representatives. The power of the legislature is limited and has been weakened through the years by other state branches, namely the Office of the Supreme Leader. Apart from the standing seat the speaker of parliament has on the Supreme National Security Council (SNSC), the parliament has no direct control over foreign or nuclear policy—apart from the platform the legislative chamber provides for its membership to opine on the nuclear file and Iran’s adversaries and allies in the media.

To read UANI’s resource Who Will Be Iran’s Next Supreme Leader?, please click here.