Iran’s President Raisi admitted in a public statement that the Islamic Republic has “weaknesses and shortcomings.” He appealed for national unity, but blamed foreign adversaries for the unrest as Supreme Leader Khamenei did yesterday.

Mashhad University students chanted: “This isn’t a protest anymore! It’s the start of a revolution.” 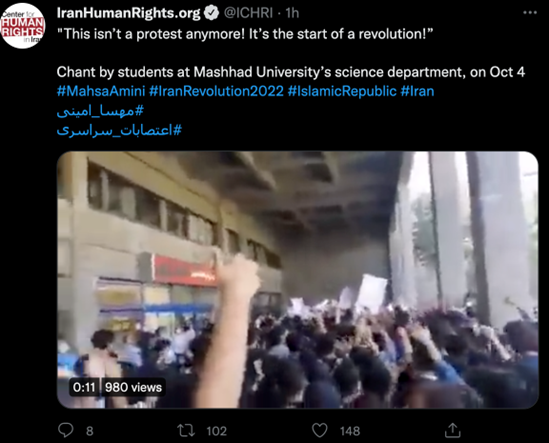 School girls walked the streets of Tehran without their hijab, chanting “Death to the Dictator.” They are participating in acts of protest and defiance throughout the country. 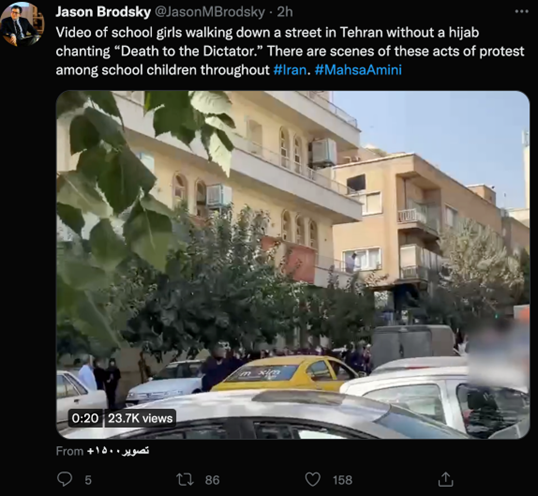 An Iranian school girl turned the portrait of Ayatollahs Khomeini and Khamenei toward the wall, and replaced it with the words “Women, Life, Freedom.” 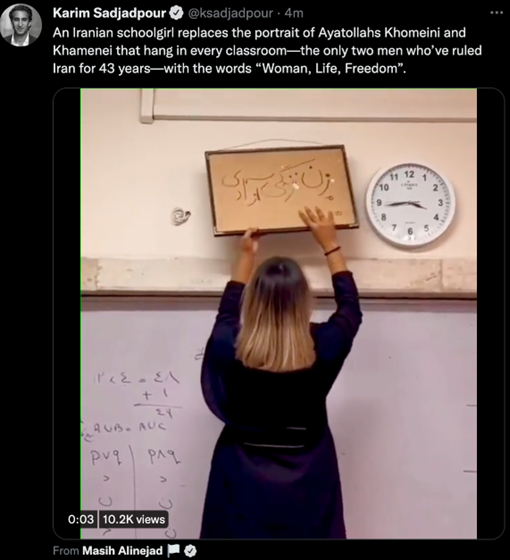 Classrooms across the country are empty because of student strikes. 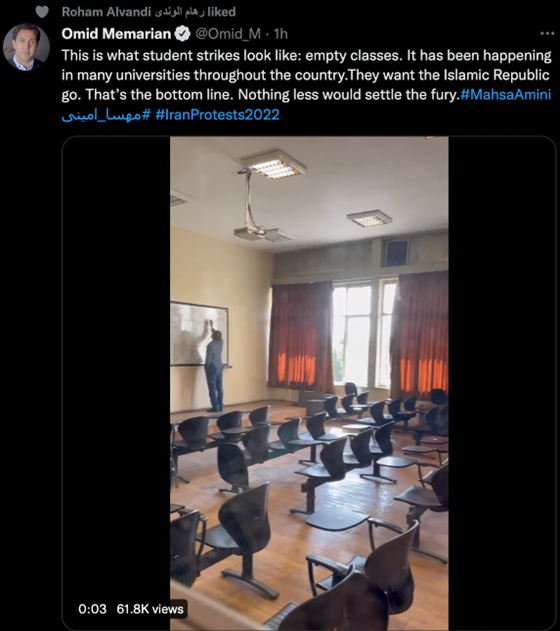 The family of a 16-year-old protester named Nika Shakarami was denied the right to bury her. Nika’s death has garnered much attention on social media. Security forces stole her dead body to prevent a funeral, which could have rallied protesters. The security forces threatened to kill Nika’s aunt, Atash, if she participated in protests.

Shops and businesses closed and went on strike in Isfahan. 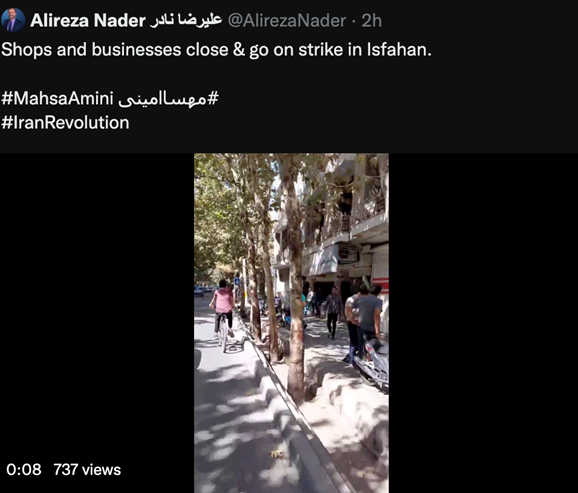 This Time, The People Of Iran Are Not Backing Down | Kaveh Shahrooz For The Line

Iran scholar Kaveh Shahrooz pointed out that in 2009 the protest slogan “Where’s my Vote” was based on a premise that elections, however controlled, could change the system for the better. The current protests, with its chants of “Death to the Dictator” and others like it, are clearly aimed at fundamental regime change.

When asked to compare the current protests in Iran and the 2009 Green Movement, Iranian scholar Fatemeh Shams said that in 2009, protesters “still [had] hope for reform.”

The White House issued a statement in President Biden’s name, which says that the U.S. “stands with Iranian women and all citizens of Iran.” The statement proceeds to list actions that the U.S. government is taking to support the protesters, such as improving internet access and “imposing costs” on Iranian officials responsible for perpetrating violence against peaceful protesters.

Activists and analysts condemned the Biden administration’s response to the protests in Iran, pointing out that it continues to assure Iranian officials that the U.S. will facilitate the regime’s access to hundreds of billions of dollars if it accepts the U.S. offer to mutually reenter the failed 2015 nuclear deal.

The CIA director told CBS News that his analysts do not think the protests in Iran are isolated protests. The Iranian people are “fed up…because of economic decay, corruption, social restrictions, especially that Iranian women face, and political repression.” He said that the U.S. is committed to supporting the free flow of information in Iran, but did not detail plans on how that goal would be reached. 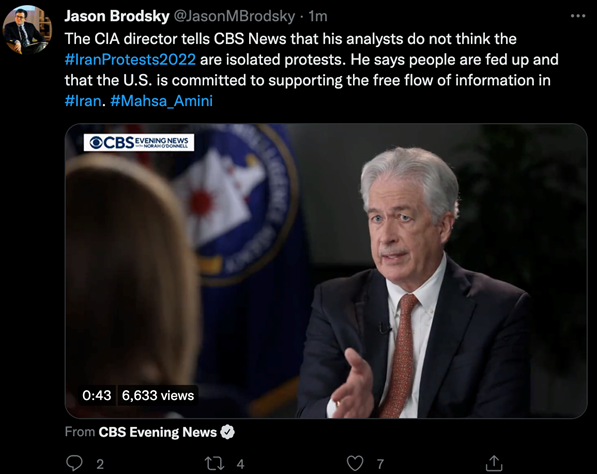 The director of Netblocks – which tracks internet outages, mobile service disruptions, and the ban on What’s App and Instagram in Iran – said that the current blackout is more sophisticated and targeted than the blackout during the 2019 protests in Iran. Digital activists fear that the Biden administration’s efforts to support the free flow of information may not be enough to address the issues facing Iranians attempting to communicate on the internet.

France’s foreign minister said that the E.U. was looking to impose asset freezes and travel bans on a number of Iranian officials involved in the government crackdown on protesters.

This New York Times article breaks down some of the salient features of the ongoing protests in Iran based on analysis of video footage, much of which was found on social media. The article notes that inside Iran there is widespread solidarity with the women protesters leading the opposition movement.