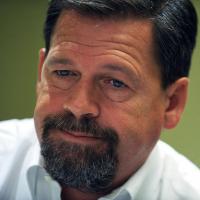 Mark Salter is a former Chief of Staff to Senator John McCain and a senior advisor in both the Senator’s presidential campaigns. Prior to his promotion to chief of staff, he was for over three years the Senator’s chief foreign policy advisor, and in that capacity was directly involved in legislation concerning many defense and foreign policy issues, including U.S. defense and foreign assistance programs in Central American countries; the authorization of the U.S military deployments to Bosnia; the normalization of U.S. relations with Vietnam, human rights policies for numerous countries; homeland security and the U.S. interventions in Iraq and Afghanistan.

From 1982 until 1986, he was as a press officer in the United States Mission to the United Nations, following which he served until 1989 as press aide and speechwriter to former U.S. Ambassador to the U.N, Dr. Jeane Kirkpatrick.

He graduated from Georgetown University in 1981, and served an internship at the Bureau for Intelligence and Research in the Department of State.

He is also the co-author with Senator McCain of five books, all of which appeared on the New York Times bestseller list.

He lives in the Washington, D.C. area with his wife and two daughters.