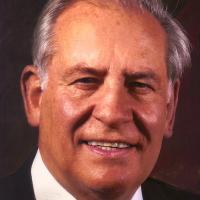 Charles Guthrie joined the Welsh Guards in 1959 and in the 60s served with them and the SAS in the United Kingdom, Germany, Libya, The Middle East, Malaysia and East Africa. He spent 1972 as a student at the Army Staff College and then held a number of appointments in Whitehall and with his Regiment in London, Northern Ireland and Cyprus. From 1977 to 1980 he commanded the Welsh Guards in Berlin and Northern Ireland. In 1980 he served briefly in the South Pacific and as the Commander British Forces, New Hebrides, recaptured the island of Espirito Santo, which had been seized by insurgents. Apart from holding a number of senior staff appointments, he commanded an Armoured Brigade, an Infantry Division, 1st British Corps, the British Army of the Rhine, and the Northern Army Group before becoming Chief of the General Staff (Head of the Army in 1994). From 1997 to 2001 he was Chief of the Defence Staff and the Principal Military Adviser to two Prime Ministers and three Secretaries of State for Defence. For ten years he served as Colonel Commandant of the Intelligence Corps, was Colonel Commandant of the SAS for eleven years, and is currently Colonel of The Life Guards, Gold Stick to The Queen. He retired from the Army in February 2001.

He was a director of N M Rothschild & Sons Limited for ten years, and is now a non-executive director of Petropavlovsk PLC, Gulf Keystone Petroleum, Colt Defense LLC, and Advanced Interactive Systems Inc. In addition he is a Council Member and Executive Committee Member of The International Institute of Strategic Studies, a Visiting Professor and Honorary Fellow of King's College London, and Chairman of the Trustees of The Liddell Hart Centre for Military Archives. He is President of Action Medical Research, The Federation of London Youth Clubs, and Chairman of the Hospital of Saint John and Saint Elizabeth.