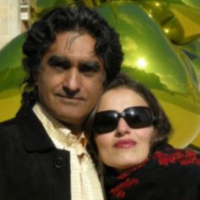 Karan Vafadari and Afarin Niasari are a married couple who live and manage an art gallery in Tehran. Karan is an American-Iranian dual national who practices Zoroastrianism. His wife, Afarin Niasari, is an architect and Muslim with Iranian citizenship and holds a U.S. green card. Karan attended the Alborz High School in Tehran and earned a degree in electronic engineering and management at New York University. Karan’s three children live in the U.S.

Afarin Niasari was detained by IRGC agents at the Tehran airport in late July 2016 as she was about to board a flight to attend a family wedding abroad. The agents told her to call her husband and ask him to come to the airport. When he arrived, he was also arrested, and both were taken to Iran’s notoriously brutal Evin Prison.

The following day, the couple was brought in handcuffs to their home, where agents took down hanging works of art, smashing some of them in the yard while confiscating others. They were then taken to their art gallery, where agents destroyed or impounded their artwork.

On August 2, 2016, Tehran Prosecutor Abbas Jafari Dolatabadi said that two unnamed “Iranian dual nationals” (apparently referring to Vafadari and Niasari) had been charged with organizing mixed-gender parties for foreign diplomats and their Iranian associates and serving alcohol in their home, a “center of immorality and prostitution.” He claimed 4,000 liters of alcohol had been found at the couple’s residence. Soon thereafter, a member of parliament, Hadji Deligani, publicly referred to the two by their first names and made similar accusations, adding that the two committed “extortion.”

The legal proceedings and Iranian media have not noted that Vafadari is Zoroastrian, and therefore is not subject to Islamic laws prohibiting alcohol and mixed-sex gatherings. Under Iran’s constitution, Zoroastrians, Jews, and Christians “are free to perform their religious rites and ceremonies, and to act according to their own canon in matters of personal affairs and religious education.” Karan's U.S.-based sister, Kateh Vafadari, added in a letter to Iran’s Supreme Leader: “In our faith and traditions, parties can be mixed. At the same time, we respect other religious traditions, such as Shiism, where men and women guests are in separate quarters.”

Vafadari has reportedly asserted that prior to his detention, he had been attempting to reclaim land that was seized from his family following the 1989 Islamic Revolution. In her letter to the Supreme Leader, Kateh Vafadari said Karan and Afarin were arrested “to fabricate a case for the purpose of extortion and property seizure.”

Kateh Vafadari stated that Karan and Afarin were initially held in solitary confinement for a month at Evin Prison’s Ward 2-A, which the IRGC’s intelligence organization controls, and later transferred to a group holding cell. Intelligence officials interrogated Afarin and pressured her to spy for them on the international art community, including her friends and even her husband. When she refused, she was thrown back into solitary confinement.

The Vafadari family was able to visit Karan and Afarin in prison several times. IRGC intelligence agents repeatedly promised family members that the couple would soon go free, but the two remained imprisoned. In the letter Kateh wrote to the Supreme Leader, she said that the jailed couple had been subjected to “extortion, property seizure, and national security threats” ever since their arrest. For months, the Vafadaris were held without being charged, and they were subjected to repeated interrogations, denied legal counsel, and repeatedly placed back in solitary confinement.

According to Kateh, in a preliminary hearing in March of 2017, Judge Abolghassem Salavati reinstated charges against the couple that were previously dropped due to lack of evidence. Salavati is nicknamed “the Hanging Judge” or “the Judge of Death” for imposing harsh sentences, including capital punishment, in political cases.

The charges he reinstated against Karan and Afarin reportedly included “attempting to overthrow the Islamic Republic,” collaboration with enemies of the state, espionage, “recruiting and signing up spies through foreign embassies,” “assembly and collusion against national security,” associating with foreign diplomats, holding dual nationality, possession of alcoholic beverages in their home, and using their residence as a center of prostitution. Salavati also barred the couple’s lawyer from the hearing and ordered Karan to fire her.

In January of 2018, Karan released a letter from prison, revealing that the couple had been sentenced. On the charge of espionage, Afarin was sentenced to 16 years in prison, and Karan was given 27 years’ imprisonment and 124 lashes, had all his property confiscated, and was fined $243,000. Karan also received 15 years in prison for hosting parties and celebrations in his home; three years and a $162,000 fine for accepting gifts of alcoholic beverages from foreigners, including diplomats; and 18 months, 64 lashes, and a fine of $38,000 for consuming wine.

Karan Vafadari claimed that the authorities had confiscated his property by unprecedentedly employing a 1928 law permitting the state to sell or seize the assets of persons who voluntarily renounced their Iranian nationality. However, Vafadari never gave up his citizenship.

Karan and Afarin sought to be released pending their appeal, but Judge Salavati imposed bail equivalent to $13.5 million for each of them. When Vafadari’s family tried to post bail for Afarin, the judge reportedly refused, saying, “If I wanted her free, I wouldn’t have set [the bail] so high.” However, in July of 2018, Karan’s son Cyrus stated that the two had finally been released on bail.

The Vafadari family initially decided not to publicize their case, hoping that it would be resolved more quickly through private channels. However, due to anonymous threats and blackmail demands by phone, Kateh Vafadari, went public on December 2, 2016, on behalf of her family with a letter to Iran’s Supreme Leader calling for the immediate release of her brother and his wife. According to Kateh, the phone calls by several unknown individuals seeking to extort money started after an Iranian member of parliament publicly mentioned the detained couple by name in November of 2016.