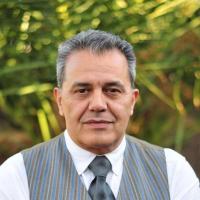 Jamshid Sharmahd is a businessman and broadcaster and an official of the Kingdom Assembly of Iran (aka Tondar). Tondar is a small exile group that opposes the Iranian regime and seeks to restore the monarchy, but opposes Crown Prince Reza Pahlavi, making it an outlier among monarchist groups.

According to a profile on Tondar’s website, Sharmahd was born in Iran in 1955 and emigrated to Germany, where he studied electronic engineering in university and then worked for large multinational corporations like Siemens and Bosch.

In 1997, per Tondar, Sharmahd founded his own software engineering firm in Germany. In 2002, he formed the U.S. company Sharmahd Computing and moved to Los Angeles the following year. He holds a U.S. visa but is not an American citizen or permanent resident, according to the Global Liberty Alliance, which represents him.

According to Tondar, Sharmahd joined the group while living in LA, which has a large Iranian expatriate community. He set up Tondar’s website and created and ran Tondar’s broadcasting arm, Radio Tondar.

The Iranian regime claims that Tondar, with the help of the U.S. and U.K., has carried out terrorist attacks in Iran, including a 2008 explosion at a Shiraz mosque that killed 14 and wounded more than 200. The group initially appeared to take credit for the attack but later distanced itself from responsibility for the blast and claimed the site was not a mosque but a base of the Basij, the volunteer paramilitary branch of the Islamic Revolutionary Guard Corps (IRGC). Tondar did assume responsibility for a blast at an Iranian refinery in 2016 and the bombing of a seminary school in 2019.  However, the group itself has not offered much evidence for its claims, and the U.S. has not designated Tondar a foreign terrorist organization.

After Tehran announced Sharmahd’s capture in 2020, Tondar proclaimed that it “will continue to fight even in the absence of companions and commanders.” However, Sharmahd’s family says that he is only Tondar’s spokesperson and was not involved in any attacks. Likewise, according to Sharmahd’s legal representatives, he “has repeatedly held that he had no involvement in any attack. He merely advocates for the freedom of the Iranian people.”

In 2009, the regime convicted and executed three men for the Shiraz mosque explosion, alleging they were affiliated with Tondar and had acted on instructions from a CIA agent. In 2010, the government hanged two Tondar members who had “confessed to obtaining explosives and planning to assassinate officials.”

The Iranian government allegedly sought to assassinate Sharmahd in 2009. An Iranian American, Mohammad Reza Sadeghnia, reportedly tried to contract with a hit man to kill Sharmahd, but the desired hit man instead reported Sadeghnia to the police and testified against him. A leaked U.S. State Department cable claimed that Sadeghnia had confessed to working for the Iranian regime and surveilling Sharmahd.

Sadeghnia served one year in prison before being released on probation. After receiving permission to visit his sick father in Iran, he did not return for a court date and disappeared.

According to the Global Liberty Alliance, Sharmahd traveled from the U.S. to India and Germany in March 2020, reportedly for business. During his trip, he was stranded for three months in Mumbai due to COVID restrictions. According to his counsel, Sharmahd then went to Amsterdam to get a flight home, but the U.S. did not allow Sharmahd to return because he did not hold citizenship or a green card. Sharmahd then decided to return to India via a connecting flight to the United Arab Emirates city of Dubai.

While in Dubai, Sharmahd corresponded with his family on July 28. He then went incommunicado. His phone’s GPS indicated that Sharmahd remained at his hotel in Dubai that day. According to the hotel, Sharmahd checked out on July 29, and GPS tracking shows his phone crossed the border from the UAE to Oman that day, even though Oman did not permit tourists to enter then due to the coronavirus. His wife received a text from his phone saying he was OK and would call her. The next day, July 30, his phone’s signal terminated.

Iran’s intelligence ministry announced two days later, August 1, 2020, that it had arrested Sharmahd “following a complicated operation.” The regime called Sharmahd “the ringleader of the terrorist Tondar” and said he “directed armed and terrorist acts in Iran from America,” including the aforementioned 2008 Shiraz mosque bombing.

Iranian state television has broadcast two coerced “confessions.” In the first, aired shortly after the regime announced his capture, a blindfolded Sharmahd, his face seemingly swollen, assumed responsibility for the Shiraz mosque attack, saying, “They needed explosives and we provided it.”

Sharmahd’s family and human rights groups have expressed concern for his health, claiming he has Parkinson’s disease, diabetes, and heart disease.

Germany’s foreign ministry official stated that their embassy has “frequently requested consular access” to Sharmahd. “However,” he added, “Iranian authorities have denied these requests.” Tehran does not recognize dual nationality, and therefore does not grant foreign consular access to Iranians who hold additional citizenships.

As permitted by Islamic Republic law, the authorities have also refused to let the lawyer picked by Sharmahd’s family meet with him or see the charges against him, according to his daughter, Gazelle, “because his case is in an investigation phase at this time.” They have offered to grant access to an attorney from a list approved by the regime, provided the family paid the lawyer $250,000.

Sharmahd has been allowed a few phone calls with his family. He informed them in November 2020 that he was jailed in Iran’s infamously brutal Evin Prison, but later told them he had been moved to a location he did not name. In March 2021, he mentioned that he had lost about 40 pounds and that the authorities had pulled several of his teeth, but did not provide additional details.

The regime has not publicly revealed the formal charges against Sharmahd, but has accused him of responsibility for the 2008 Shiraz mosque attack. After Sharmahd’s arrest, Iranian state TV also accused Tondar of launching an explosion at the Tehran mausoleum of Iran’s first supreme leader, Ayatollah Ruhollah Khomeini, that wounded several persons, and of planning to attack a dam and to detonate cyanide bombs at a book fair in Tehran.

The day the regime announced Sharmahd’s capture, a U.S. Department of State spokesperson said the administration was “aware of reports related to the detention of Mr. Sharmahd. The Iranian regime has a long history of detaining Iranians and foreign nationals on spurious charges. We urge Iran to be fully transparent and abide by all international legal standards.” In June 2021, another spokesperson from the State Department said, "We will work with our allies, many of which have citizens currently detained by Iran, to seek their citizens’ release and stand up to the disgraceful practice of using unjust detentions of foreign citizens as a political tool.”

The German government has said little about Sharmahd’s case, aside from affirming that it has repeatedly and unsuccessfully sought consular access to him. Sharmahd’s daughter, Gazelle, has criticized Berlin for negotiating with Iran to restore the 2015 nuclear deal while Sharmahd remains in prison. “The Foreign Office is negotiating with the kidnappers of a German citizen in Vienna,” she said. “How can you tolerate that as a free citizen? Germany is a big trading partner, and they can put pressure on them. They can do something, they have to do something, they cannot accept such an injustice, but they do nothing.”

“We’re seeking support from any democratic country, any free country,” Sharmahd’s son, Shayan, said. “It is a violation of human rights. You can’t just pick someone up in a third country and drag them into your country.” He added in July 2020: “Don’t be keep silent, we have to speak up. Now is definitely the time. And that goes out not just to all the people, but to all the governments, and the organisations. It affects everybody.”

Gazelle Sharmahd has stated that her father’s detention has devastated their family. “My mother has not had a single night of sleep since her partner and love of her life was forcefully taken after 40 years of marriage,” she said. “My brother and I are desperate about what to do without our role model, our father, and our best friend. My daughter, his only grandchild, was born five months ago, and I do not even want to imagine that he may never have the chance of holding her in his arms.” Gazelle said that Jamshid “did not commit any crime, unless freedom of speech or the press are considered illegal in this world. He has spent his life speaking up for the oppressed people of Iran and has taught us through his actions that helping those that cannot help themselves is one of the most important virtues of humanity.”