Member of the Canadian Parliament, Former Minister of Justice and Former Attorney General of Canada 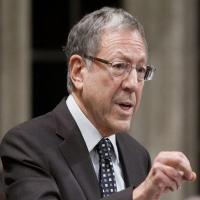 The Honourable Irwin Cotler is a Law Professor, Constitutional and Comparative Law Scholar, International Human Rights Lawyer, Counsel to prisoners of conscience, NGO Head, Public Intellectual, Community Leader and Peace Activist, Member of Parliament since 1999, former Minister of Justice and Attorney General of Canada – when, inter alia, he issued the first ever National Justice Initiative Against Racism and Hate. Professor Cotler is also Special Counsel to the Leader of the Opposition on Human Rights and International Justice, and is a distinguished academic and a prominent human rights lawyer, whose dedication to humanitarian causes has earned him the Order of Canada among many other awards – including nine honourary doctorates. He has written extensively on hate speech and the law.