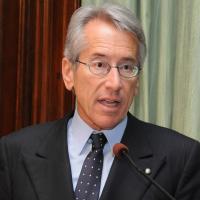 Ambassador Giulio Terzi di Sant'Agata was born in Bergamo, graduated in Law and specialized in International Law at the University of Milan. He joined Italy's foreign service in 1973. After his appointments to Paris, Ottawa, Vancouver, Nato-Brussels and United Nations-New York, from 2004 to 2008 Amb. Terzi was Deputy Secretary General, Director General for Multilateral Political Affairs and Political Director.

As Ambassador of Italy to Israel from 2002 to 2004 his focus was on strengthening bilateral relations and ties between Israel and the European Union. The Italian Presidency of the EU during the second semester 2003 was an opportunity in that direction, with some important European decisions proposed and supported by the Italian Presidency on security issues and the peace process; such as the one leading to the blacklisting of Hamas as terrorist organization, and the EU role in advancing the "road map", with the concept of "two States".

Transatlantic relations, international security, crisis management, peacekeeping operations, development and human rights were the priorities on Amb. Terzi’s agenda as Permanent Representative of to the United Nations in New York from 2008 to 2009, during the Italian mandate in the UN Security Council.

As Ambassador to the United States until November 2011 Amb. Terzi worked on further strengthening bilateral cooperation in international security as well as in economic, cultural and scientific matters. He launched a country wide‎ strategy with hundreds of events and programs to promote Italian culture, science and language. ‎The "2013 -Year of the Italian Culture in the USA" was the main outcome of these efforts, together with the inclusion of Italian among the main foreign languages in American schools certified by the Advanced Placement Program.

From November 2011 until March 2013 Amb. Terzi was Minister for Foreign Affairs.

He is currently active in political and academic life on the main aspects of foreign policy, European affairs, crises management, international security, promotion of human rights and fundamental freedoms. Since March 2016 Amb. Terzi is President of the "Global Committee for the Rule of Law", which its aim is to promote the full affirmation of human rights worldwide by the recognition of the right to know, a core element of the Rule of Law. The Committee, urges a system of accountability instruments affecting all stages of the decision making process, and capable of guaranteeing the same rights to all citizens and ensuring that their freedoms and rights are effectively protected.

Amb. Terzi writes for Italian and international publications, newspapers, blogs, social media, and he is frequently interviewed by national and foreign TV and Radio networks. He attends conferences, seminars and debates‎; he gives lectures in major Universities, think-tanks, Cultural institutions for which he is also Board or Honorary Member.