The environmental deterioration in Iran caused by the regime’s corruption, incompetence, and mismanagement of environmental policy carries significant public health and national security risks. Factors such as air and water pollution, water shortages, and loss of farmland have inflicted suffering upon Iranians across the country and in all walks of life. The resulting social upheaval, which has disparately impacted poor and rural Iranians and those from disfavored ethnic minorities, has driven millions out of their farms and villages to slums on the periphery of larger cities, exacerbating resource competition and rural/urban societal cleavages. Those who have stayed behind face increasingly inhospitable conditions and as many as 50 million Iranians may ultimately be displaced.

The impending environmental crisis poses formidable risks to internal cohesion, which should incentivize Tehran to adopt the recommended policy fixes. Since late December 2017, the regime has faced a revived protest movement stemming primarily from marginalized communities. The protesters’ grievances have centered largely on economic mismanagement, corruption, rising inequality, inadequate provision of social services, and lack of attention to infrastructure needs. Rising unemployment and inflation, as well as rapid currency devaluation—trends that have accelerated since the reimposition of sanctions and the exodus of foreign companies in the aftermath of the Trump administration’s decision to withdraw from the 2015 Iran nuclear deal—have further compounded Iran’s domestic unrest. The economic promise of the nuclear deal never materialized for average Iranians, as the regime siphoned billions of dollars in previously frozen assets and increased revenues from trade and investment into foreign adventurism, bloated military budgets, and further enrichments for the Supreme Leader, the IRGC, and their affiliated patronage networks.

Environmental deterioration is another salient, lesser-understood factor undergirding Iran’s domestic unrest. Although environmental considerations are rarely the explicit cause for protests, they act as a force multiplier—an added combustible ingredient on top of the Iranian citizens’ social, political, and economic grievances. Lack of drinking or agricultural water is a potent symbol of the government’s failure to provide the most basic of services to its people.  According to Nikahang Kowsar in an in-person interview, around 85 percent of the demonstrations since the resumption of protests, in 2019, have taken place in areas hit by drought and water shortages due to excessive damming, and many of these demonstrations have been among the most violent examples of unrest.

In July 2018, the regime quelled four days of demonstrations in Khorramshahr, a majority-Arab city in the oil-rich Khuzestan province bordering Iraq, by escalating from using tear gas to disperse the protesters to employing live fire, reportedly killing four. The protests centered on the lack of desalinated water for drinking and agriculture due to the regime’s mismanagement, which had exacerbated local drought conditions.

In August 2018, protests broke out against the IRGC in Marivan, a city in Iranian Kurdistan, after the IRGC reportedly set wildfires in order to drive out Kurdish peshmerga forces. Four environmental activists died fighting the blazes, triggering demonstrations featuring thousands of protesters.

Iranian environmental activists and protesters do not always function as a unified bloc and are frequently concerned primarily with local issues, instead of the larger picture of the regime’s environmental mismanagement. This has led to tensions between activists in different provinces fighting over the rights of certain rivers and their sources. For example, activists in Isfahan province fighting to save the Zayandeh Roud River call for water to be transferred from the Karun basin and the Gavkhuni wetland, which has virtually dried up, pitting environmentalists with conflicting interests against each other. The regime has encouraged and exploited such discord as part of a divide-and-conquer strategy.

Targeting of Activists and Experts

In addition to demonstrators who are directly impacted by deteriorating environmental conditions, numerous Iranian environmental experts and activists have warned that the regime’s mishandling of water resources and agricultural and industrial malpractice are setting the nation on an unsustainable, calamitous path. Rather than acting to placate protesters, activists, and experts by changing its harmful policies, the Iranian regime has repressed those groups.

Iran’s campaign against environmental activists and experts is borne of a power struggle between the pragmatic factions represented by the Rouhani administration, and the hardline clerical and IRGC elites who provide the backbone of support for Supreme Leader Khamenei and remain the true power brokers in Iranian society. Rouhani was elected twice on a platform that prioritized boosting civilian power in the political and economic spheres by curtailing the IRGC’s pervasive control. From 2013 to 2015, Rouhani’s administration sought and obtained a nuclear deal with Western powers—with Khamenei’s cautious backing, since-rescinded. Rouhani’s primary motivation was to open up the Iranian market to Western trade and investment, which he believed would empower civilian business interests at the expense of the IRGC. It should be noted that Rouhani’s efforts to empower an alternative civilian elite do not stem from benevolence, but from his belief that this represents the ideal path to salvage and preserve Iran’s Islamic revolutionary regime, and to enrich his political allies and benefactors.

The IRGC, naturally, has proved loath to cede its power, influence, and riches, and therefore acted to sabotage the Rouhani administration’s machinations for greater economic openness and integration with the West. The IRGC has sought, through threats and harassment, to prevent investment in Iran from those who would not give the Guards their share. Most notably, the IRGC’s intelligence organization arrested Siamak Namazi, a member of a prominent Iranian-American family who had been in business with powerful elements of the regime since the early 1990s, such as the Rafsanjani and Khatami administrations. The Namazis and their associates were also close to President Rouhani’s team and had sought to invest in Iran. Subsequently, Siamak’s father, Baquer, was arrested after attempting to visit his son. The Namazis’ arrests sent the message that the IRGC would not allow alternate elites to challenge its prosperity and served to chill the investment plans of other Iranian expatriates.

The power struggle between the Rouhani administration and the IRGC has played out similarly in the environmental sphere. The administration, particularly DOE head Issa Kalantari, has recognized the severity of Iran’s impending environmental crisis in remarkably candid terms. Rouhani’s team has called for environmental reforms and more sustainable policies, most notably moving to curtail dam construction, a crucial revenue generator for the IRGC and its construction arm, Khatam al-Anbiya. Environmental activists have also sought to prevent the IRGC from carrying out military exercises and building military installations in protected lands. Sensing a threat to its profits and military activities, the IRGC has responded by harassing and/or arresting water-management and environmental activists and experts—and often, their families. The regime has also stepped up targeting of environmental activists due to their demonstrated ability to mobilize protesters, which Tehran considers a threat.

In January and February of 2018, the IRGC arrested 13 environmental experts and wildlife-preservation activists. According to a report from an opposition website, the IRGC carried out the arrests due to the detainees’ opposition to the IRGC’s efforts to install missile silos and related military equipment on UN-protected environmental-preservation areas.

The IRGC’s intelligence organization has held the detainees in its wing in Tehran’s notorious Evin prison, where they have suffered from mistreatment and abuse. The IRGC has denied the detainees visitation with their families and lawyers. In June, two of the detainees reported suffering a nose injury and broken teeth. In October, five of the detainees’ charges were reportedly upgraded from espionage to “corruption on Earth,” a capital offense. Iran’s Islamic Penal Code defines “corruption on Earth” as: “Any person who extensively commits felony against the...people, offenses against internal or international security of the state, spreading lies, disruption of the economic system of the state, arson and destruction of properties, distribution of poisonous and bacterial and dangerous materials, and establishment of, or aiding and abetting in, places of corruption and prostitution…shall be considered as ‘corrupt on earth’ and shall be sentenced to death.” 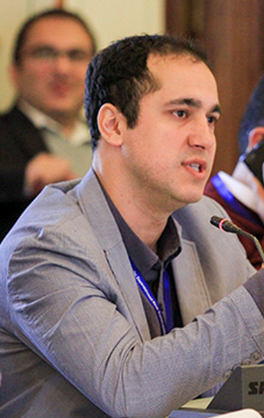 In February 2020, Iran’s judiciary announced that it had sentenced eight of the detained environmentalists to prison sentences ranging from four to ten years. Morad Tahbaz, an American citizen, received a ten year jail sentence for allegedly cooperating with the U.S. government. Five others were convicted for the same charge, one for spying, and one for threatening national security. From the initial detainments through the sentencing announcement, the judiciary did not present any evidence publicly to substantiate its allegations. In May 2018, an Iranian government panel tasked with investigating the arrests concluded that there was no evidence linking the environmentalists to espionage.

Another prominent instance of the IRGC’s targeting of environmental experts was their harassment of Kaveh Madani. Rouhani and DOE head Issa Kalantari asked Madani, an American-educated water-management expert and academic, to leave his teaching post in London to return to Iran and serve as deputy head of the DOE, where his expertise would be put to use in reversing the country’s water shortages. It was also hoped that Madani’s appointment would lead other expatriate technocrats to return to Iran to apply their expertise to solving the country’s problems, stanching an ongoing brain drain.

Madani alleges that the IRGC harassed him immediately upon his arrival in Iran in September 2017, and that IRGC intelligence agents accessed his online accounts and confiscated various files and photos. The harassment grew worse following the resumption of domestic unrest in late December 2017 due to the regime’s increased sensitivities. In February 2018, the IRGC detained Madani again but ultimately released him due to public outcry. The IRGC accused him of spying on behalf of the MI6, Mossad, and CIA.

The IRGC’s mistreatment of Madani was meant to undermine the Rouhani administration and can be viewed as an extension of its power struggle with the pragmatic factions. Madani was also marked for persecution because of his outspoken criticism of Iran’s water mismanagement, particularly its over-construction of dams, which the IRGC viewed as an attack on its economic interests. The IRGC’s harassment campaign led Madani, fearing for his safety, to resign his post in April and flee the country. Angered conservative parliamentarians summoned Intelligence Minister Mahmoud Alavi, a Rouhani ally, to Iran’s parliament to demand answers for how Madani was able to leave the country without facing the espionage charges against him.

Reformist politicians were critical of the regime’s handling of the Madani affair, complaining that it would have a chilling effect on expatriate elites from returning and contributing their expertise to solving the country’s many issues. In the face of mounting environmental and water crises, the Iranian regime and IRGC have employed a shoot-the-messenger approach, choosing to repress protesters, activists, and experts and reject their demands and advice in favor of protecting their narrow, short-term political and economic interests. As climate change, environmental mismanagement, and corruption continue to take their toll, Iran is likely to face growing protests and subversive activities, particularly from those hardest hit in peripheral communities, which also face the worst ethnic, political, and economic discrimination in the country.