Cruel and Inhuman: Executions and Other Barbarities in Iran’s Judicial System

Iran’s judicial system remains among the most brutal in the world. The Iranian regime executes more people per capita than any other country. It carries out more total executions than any nation but China, whose population is over 17 times that of Iran’s. Tehran continues to target political dissidents and ethnic, religious, and sexual minorities for execution. Capital punishment can be—and often is—carried out against juvenile offenders and for nonviolent crimes.

The cruelty and inhumanity of Iran’s judicial system goes well beyond executions, however. Individuals may be arrested and indefinitely detained without charge or on trumped-up offenses; subject to degrading treatment, including torture, in order to extract confessions; denied rights such as access to legal counsel and fair and speedy trial; and sentenced to other barbaric penalties such as amputation, blinding, and flogging.

Those accused and/or convicted of perpetrating crimes are incarcerated in overcrowded prisons where they may be subject to torture, rape, and other atrocities. Iran’s densely populated and dirty penitentiaries are also breeding grounds for the novel coronavirus (COVID-19) and other illnesses, and prisoners are often denied necessary medical care (including COVID-19 tests), personal protective equipment, and disinfectant.

Here are some facts and figures on the use and abuse of executions and other barbarities by Iran’s judicial system. 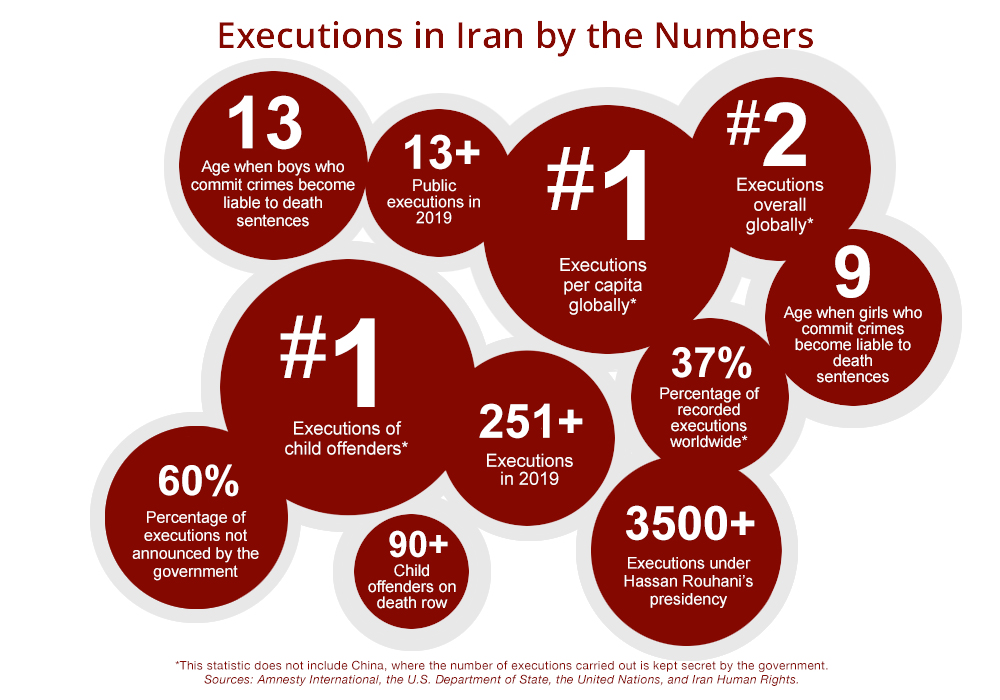 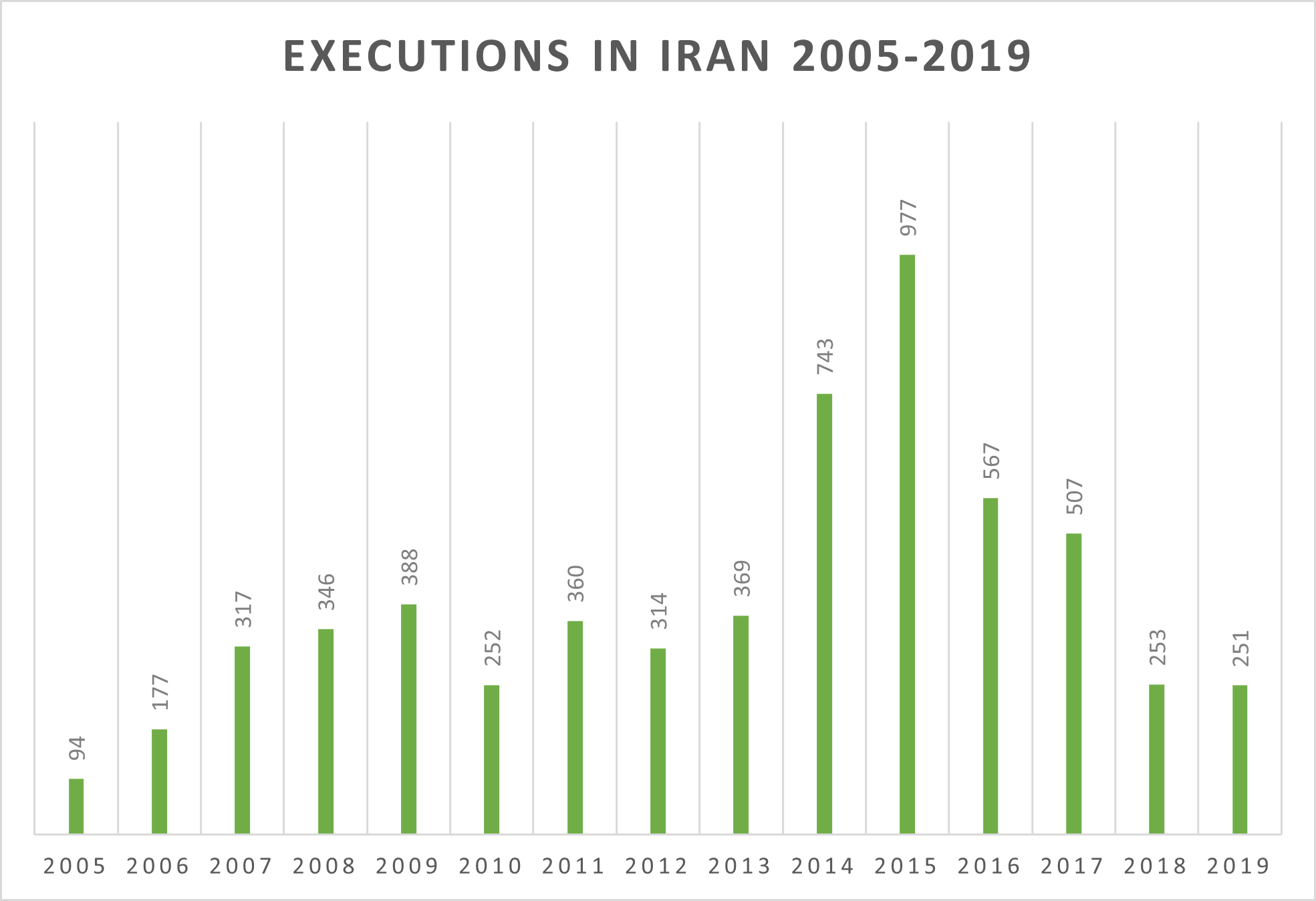 Iran executes the majority of convicts by hanging within prisons. The regime, however, also regularly carries out executions in public, including at least 13 in 2019. In many of these cases, the victim is publicly hanged from a construction crane, an especially slow and painful execution method.

Stoning also continues to be a state-sanctioned form of execution. Other legal methods of execution include firing squad, beheading, and being thrown from a height.

The Iranian regime hanged champion wrestler Navid Afkari on September 12, 2020, in Iran’s most prominent execution in years. Afkari was convicted of and sentenced for purportedly murdering a security guard during widespread public protests in 2018. He was 26 or 27 years old when executed.

Shiraz’s Criminal Court condemned Afkari to death, as well as one year in prison and 74 lashes, for “participation in illegal demonstration and disrupting public order,” and three-and-a-half years for “disobeying a law enforcement officer’s order and insulting him.” The city’s Islamic Revolutionary Court, which hears cases based on political “crimes,” sentenced Afkari to death for death on the charge of moharebeh (“waging war against God”) and two years in prison for insulting Iran’s supreme leader, Ayatollah Ali Khamenei. His trials were held in secret.

Afkari claimed that the authorities tortured him into confessing to the crime, including by beating him with a baton and choking him by covering his head with a plastic bag until he almost suffocated. Iranian state television aired his confession on September 5, one week before his execution.

Shortly before Afkari’s death, a recorded message from him was released. "If I am executed, I want you to know that an innocent person, even though he tried and fought with all his strength to be heard, was executed,” he said.

Afkari’s defenders, including the U.S. Department of State, argue that the regime executed him for simply participating in the protests. Reportedly, the government responded to the demonstrations with brutal repression, including by arresting thousands of protesters and flogging, sexually abusing, and otherwise torturing many of them. Iran has long waged war on protesters, including through both extrajudicial killings and death sentences for trumped-up charges

The Iranian government executed Iranian activist and former journalist Ruhollah Zam on December 12, 2020. Zam lived in exile with refugee status in France and openly sought the overthrow of the Islamic Republic. He ran Telegram channels to spread information to Iranians protesting the regime and encouraged viewers to join demonstrations. Zam’s channels—particularly AmadNews—disseminated times and places of upcoming rallies to its subscribers, who numbered more than a million. He also published controversial materials undermining the regime, including documents revealing government corruption and malfeasance.

The IRGC claimed Zam was being guided and safeguarded by American, Israeli, and French intelligence agencies, and called him “one of the main people of the enemy’s media network and psychological warfare.” A senior IRGC general said, “Zam was a key figure of intelligence services for throwing the country into disarray… and driving a wedge between the Iranian people and government.” On October 23, 2019, an IRGC spokesperson claimed that the Guards had “already captured many of [Zam’s] contacts inside the country.” Media and others tied to the IRGC have said that finding Zam’s network of sources is more important than capturing the activist himself.

The regime forced Zam to confess on Iranian television to engaging in “counter-revolutionary” actions in France's direction. He apologized to the Islamic Republic, said he regretted “what has happened in the past three or four years,” and stated that he was “wrong” to trust foreign governments like France’s, and “especially governments that show they do not have good relations with the Islamic Republic," including the United States, Israel, Saudi Arabia, and Turkey.

Zam’s trial began on February 10, 2020, in Tehran’s Revolutionary Court. Zam was reportedly charged with either 15 or 17 counts, including “sowing corruption on earth,” insulting “the sanctity of Islam,” and “conspiring with the US Government against the Islamic Republic of Iran”—all of which carry the death penalty—as well as having “committed offences against the country's internal and external security,” “complicity in provoking and luring people into war and slaughter,” “espionage for the French intelligence service,” “spying for Israeli intelligence services via the intelligence services of one of the countries in the region,” “establishment and administration of the Amad News channel and the Voice of People,” and “insulting Ruhollah Khomeini and Ali Khamenei.”

An Iranian judiciary spokesman announced on June 30, 2020, that Zam had been convicted and sentenced to death for 13 counts, which were grouped together and treated as cases of “sowing corruption on earth.” He was also sentenced to life in prison for “several other charges,” which were unnamed. On December 10, 2020, an Iranian court upheld the death sentence against Zam.

In late 2020 and early 2021, the regime executed a slew of political prisoners from the Ahwazi Arab and Balochi ethnic minority communities in Iran. Most Ahwazi Arabs reside in the Iranian province of Khuzestan, while most Balochis live in the Balochistan region, which makes up parts of Iran, Pakistan, and Afghanistan.

On February 28, the authorities killed four Ahvazi Arabs: Jasem Heidary, Hossein Silawi, Ali Khasraji, and Nasser Khafajian. The regime provided zero notice in advance to the families of those executed. Relatives were brought to the prison and permitted to visit their imprisoned kin for 20 minutes. The relatives were then told to wait, and 30 minutes later—again, with zero notice—they were brought the bodies of their loved ones.

The regime accused Silawi, Khafajian, and Khasraji of attacking a police station in 2017 and killing two police officers. The three were denied access to relatives and legal counsel. They were tortured—including by being beaten and having their ribs or hands broken, and being placed in extended solitary confinement—into “confessing” to crimes, and they were sentenced to death on the basis of those coerced confessions. The three were transported to an undisclosed location for months.

Heidary was charged with “armed insurrection.” He likewise was tortured, including by being thrown into solitary confinement for months, and sentenced to death for purportedly working with anti-regime organizations.

The Iranian government has also executed at least 21 Baluchis from December of 2020 to February of 2021. Among those killed was Javid Dehghan, whom the regime hanged on January 30. He was charged with being part of an armed group and an attack that killed two of Iran’s Islamic Revolutionary Guard Corps members. As with other prisoners, his captors tortured Dehghan into “confessing” and he was sentenced to death.

Other Evils in Iran’s Judicial System

Severe Forms of Punishment besides Execution

Extreme methods of punishment in Iran other than the death penalty include amputation, blinding, and flogging.

Iran incarcerates an estimated 625 known political prisoners and members of ethnic and religious minority communities as of March 4, 2021, according to the Iran Prison Atlas of the NGO United for Iran. Such prisoners include:

Trampling on the Legal Rights of the Accused

The Iranian government frequently violates the legal rights of the accused by denying them:

Torture and Other Degrading Treatment of the Accused

Those arrested or otherwise detained in Iran face appalling treatment—often to coerce confessions—including:

What’s a Crime in Iran?

Iran violates its citizens' human rights by arresting, detaining, imprisoning, and often executing them for “crimes” often committed merely by exercising fundamental freedoms. Many of these offenses are vaguely defined and can thus be exploited for arbitrary detention and punishment. Such crimes include (those punishable by execution are marked with an asterisk):

Those incarcerated in Iranian prisons are subject to cruel, inhuman, and degrading treatment, including:

COVID-19 has ravaged Iran. As of March 31, 2021, Iran has had more than 1.9 million cases of the virus and over 60,000 deaths, according to Johns Hopkins University’s COVID-19 Dashboard. Iran is 11th in the world in novel coronavirus deaths and 15th in cases. The virus has hit prisoners particularly hard because of the aforementioned overcrowding, unsanitary conditions, and denial of health care. High-ranking prison-system officials have repeatedly complained to the health ministry about having insufficient disinfectants, personal protective equipment, and essential medical devices but have received no publicly reported response.

In February 2020, the authorities temporarily furloughed a reported 120,000 some-odd prisoners, presumably to reduce the population density in its prisons and minimize the virus's spread. However, most political prisoners were not released, and according to the Office of the United Nations High Commissioner for Human Rights, the regime has ordered “large numbers” of those furloughed to go back to prison.