Germany was again Europe’s largest trading partner with Iran by far, exporting $1.64 billion worth of goods in 2019. While German banks have been largely reluctant to finance Iran trade, there are at least five banks – all owned/operated by Iran and all operating inside Germany – that are more than happy to step in.

Siemens, Volkswagen and the big multinationals have pulled back due to U.S. sanctions, but many of Germany’s 3.5 million small-and-medium enterprises (SMEs) are still prepared to do business with Iran. And they still can. From Hamburg in the north to Munich in the south, the “Mittelstand” firms can obtain Letters of Credit, bank guarantees, insurance and all the other trade finance products they need from their Iranian facilitators.

Given the likely entanglement with regime and Islamic Revolutionary Guard Corps (IRGC) entities, trading with Iran is risky enough. A brief accounting of the institutions that are facilitating this trade – which would mitigate such risks in other contexts – provides little comfort.

The oldest Iranian bank operating in Germany is Bank Melli, established in 1965 in Hamburg. It is also Iran’s national bank, wholly owned by the Government of Iran (GOI), and its biggest company by revenue. The U.S. Treasury sanctioned Bank Melli in 2018 for its support of the IRGC, having “enabled the IRGC and its affiliates to move funds inside and outside Iran.”

The third Hamburg-based bank and perhaps most notorious of all is the European Iranian Handelsbank (EIH). Unlike the others, EIH is in fact incorporated and headquartered in Germany, with branches in Tehran and Kish Island. Since its founding in 1971, it has financed billions of dollars of German-Iranian trade and is majority-owned by the sanction-designated Iranian state-owned bank, Bank of Industry and Mine. The U.S. Treasury’s Financial Crimes Enforcement Network (FINCEN) has named EIH as a money-laundering threat, having assisted several of Iran’s top military and defense agencies, including the IRGC, the Defense Industries Organization (DIO) and AIO.

Germany’s financial center, Frankfurt, is home to both Bank Sepah and Bank Saderat, which was set up in the same year as the Iranian Revolution, in 1979. With branches across Europe and the Middle East, Bank Saderat is another large state-owned bank that has helped the regime support its terrorist proxies, including Hamas, Hezbollah, Palestinian Islamic Jihad (PIJ), and the Popular Front for the Liberation of Palestine (PFLP).

Finally, Middle East Bank (MEB) is the newcomer to German’s Iranian banking scene having established its branch in Munich in 2018. It is the only Iranian bank in Germany’s southern states, although there are reports that Sina Bank and Parsian Bank are also looking to set up in the Bavarian capital. Oddly, MEB is the only Iranian bank here not subject to ‘secondary sanctions’ – which exposes companies to penalties even outside U.S. jurisdiction. On November 11, 2018, just three days after the initial application, the Office of Foreign Assets Control (OFAC) removed the tag. It is unclear why OFAC did so, and the agency may wish to look again, but MEB advertises the fact prominently on its website. Nonetheless, MEB remains a risky, sanction-designated entity.

With less exposure to U.S markets and potential sanctions than the multinational household names, Germany’s Mittelstand are still willing to supply Iran’s demand for industrial goods. Given the records of the Iranian banks that are helping to facilitate it, however, the risks are only amplified. 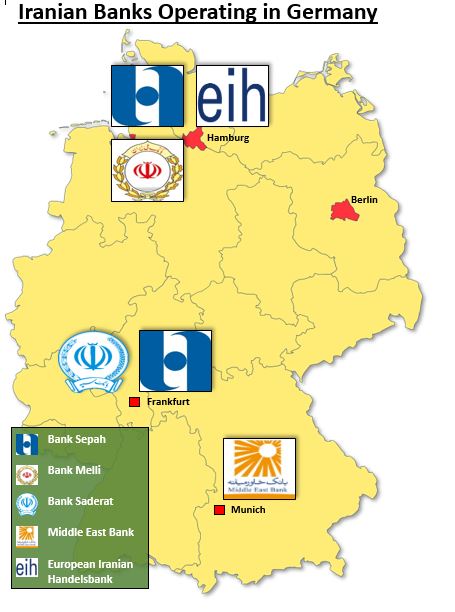