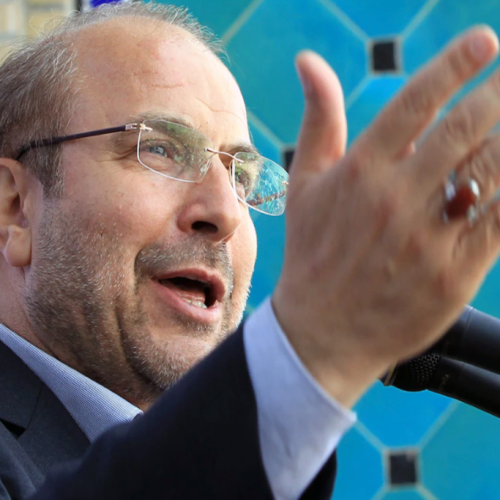 Former head of the Law Enforcement Forces (LEF). "Recently-released [2013] recordings suggest that Ghalibaf's hardline leanings run deeper and darker than he has publicly admitted...  [H]uman rights watchers sounded alarm bells following the emergence of a two-hour recording in which Ghalibaf addresses an obstinate group of the Basij, the IRGC's paramilitary wing. The tape... shows Ghalibaf taking credit for a series of violent acts of repression, including a passage in which he describes himself 'beating [protesters] with wooden sticks' on the back of a motorbike during the 1999 events. Elsewhere in the recording, he boasts of ordering police to fire gunshots at protesters during on-campus student demonstrations in 2003. He also commends himself for an effective response to the unrest following the disputed 2009 presidential election, which saw widespread killings and abuse of demonstrators."2

As mayor of Tehran (2005–17), "Ghalibaf has been involved in the crackdown on peaceful protesters following the 2009 election results. In a speech at the Basij base in 2013, he acknowledged the illegal use of the municipality as part of a security apparatus to suppress peaceful protesters: 'In the case of sedition [the title used by government officials for popular protests], I used the name sedition from the beginning. Because I did security and intelligence work anyway, and I am an expert in this matter. At the top level, I have said that Sardar Soleimani and I probably made the biggest move to prevent the incident from Saturday to Thursday [after the election], and you should know about the municipality that the municipality is a public non-governmental organisation. According to the evaluation of the performance of various agencies after the sedition, the municipality of Tehran is ranked third among the five security agencies that worked in this area. This shows that the municipality has done its job in the style of security institutions.'"3

Member of the Supreme Council of the Cultural Revolution, an extremist-dominated government policy-making body that developed stricter regulations in 2019 for mandatory hijab wearing. Appointed by the supreme leader. Headed by Iranian President Ebrahim Raisi, who has spearheaded increased enforcement of hijab laws and regulations, including by the "Morality Police."4

Member of the Supreme National Security Council (SNSC). As the Critical Threats Project notes, "The SNSC is the highest defense and foreign policy body within the regime.. The council, under Khamenei, also dictates and oversees all efforts to quash protests."5