As of yesterday—the twentieth day of protests in Iran—over 400 people had been killed in the regime’s bloody crackdown; thousands of others have been arrested and detained. 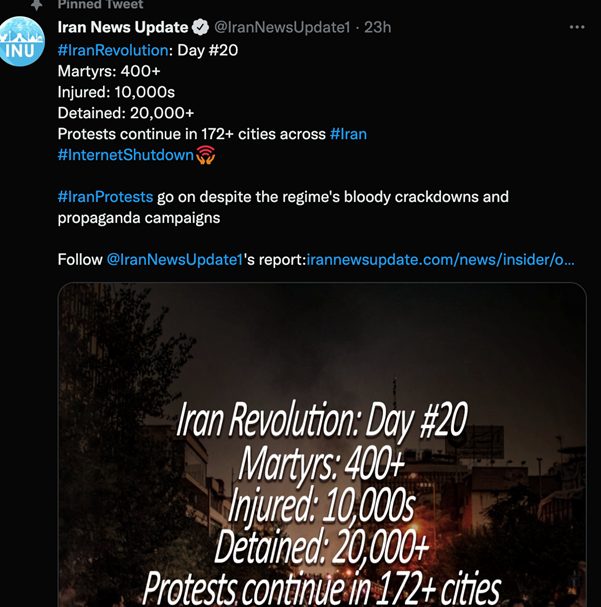 Regime violence has resulted in the death of an unknown number of protesters under the age of 18. 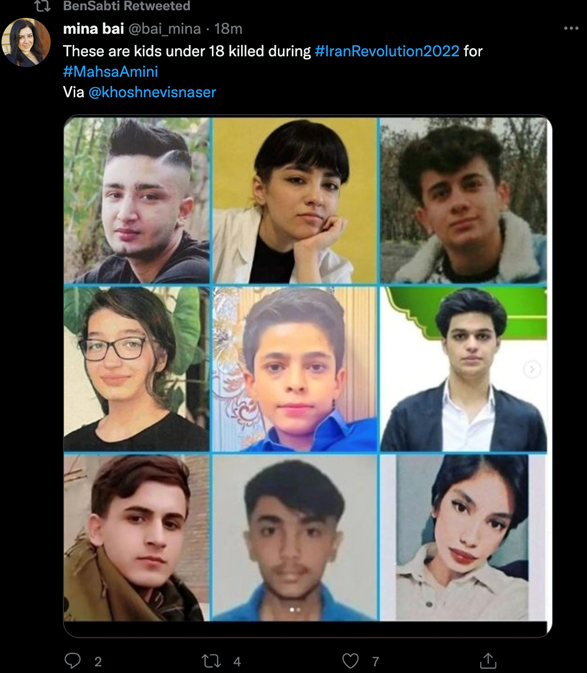 Amnesty International reported that 82 Baluchi people have been killed in Iran’s bloody crackdown. 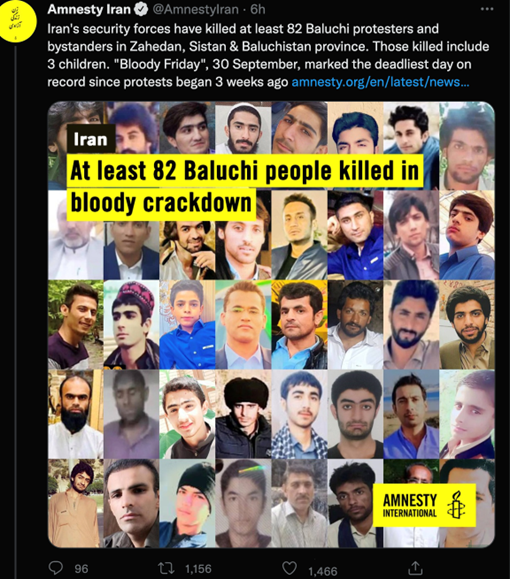 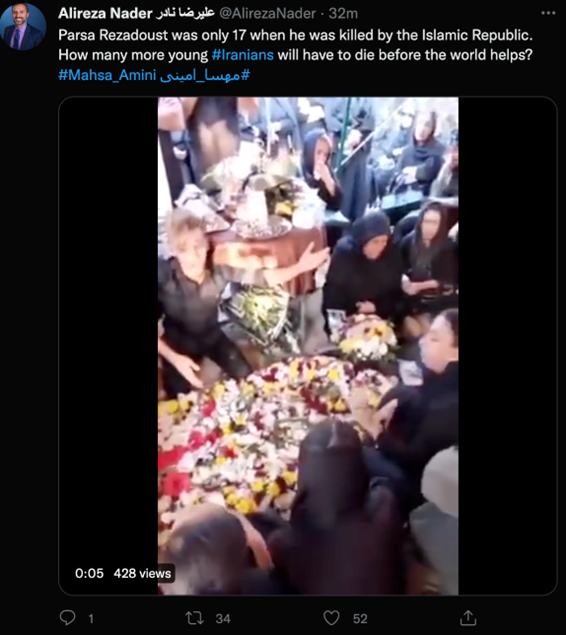 This 16-year-old girl was killed by security forces in September. 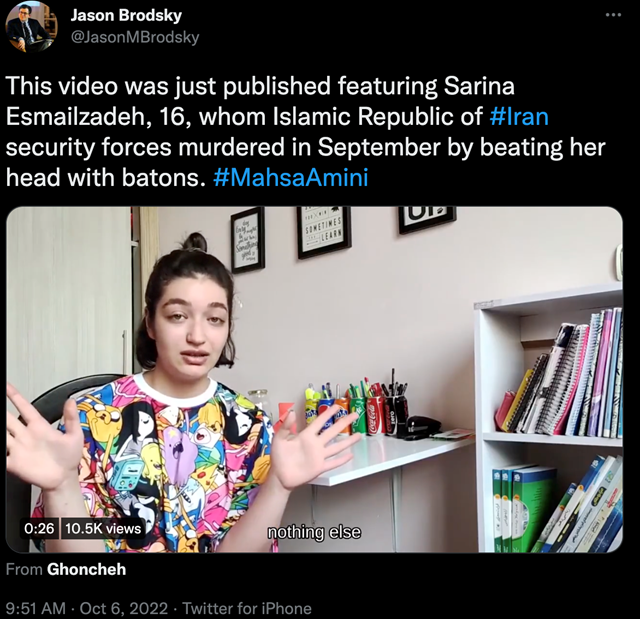 Iran Wire reported that security forces shot and killed Behnam Layeghpour after he went on strike from his work in solidarity with the ongoing protests.

The Basij—a paramilitary group within the IRGC—reportedly fired rubber bullets and paintballs at students at Sharif University of Technology on October 2. A professor described the confrontation as a warzone, with tear gas and bullets flying through the air.

The violent crackdown on protesters in Zahedan—a Sunni-majority city—on September 30th resulted in at least 63 people killed, some by sniper fire. The protests erupted because of accusations that a regional police chief had raped a 15-year-old girl. The area has calmed down, but renewed protests are possible after tomorrow’s Friday prayer.

Pedestrians protected a young protester from being brutally abducted by regime security personnel. 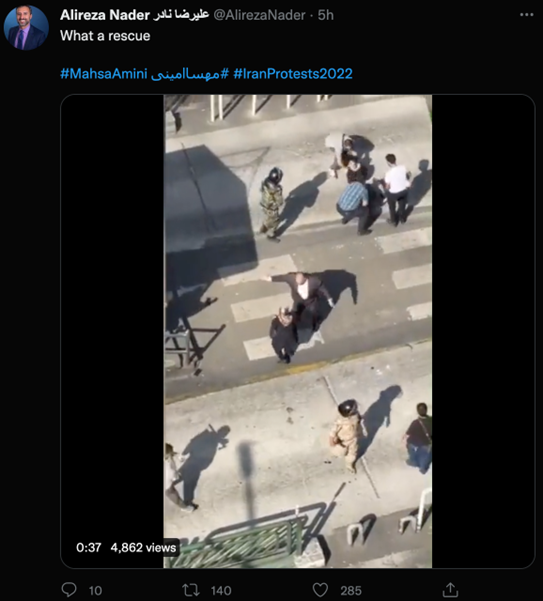 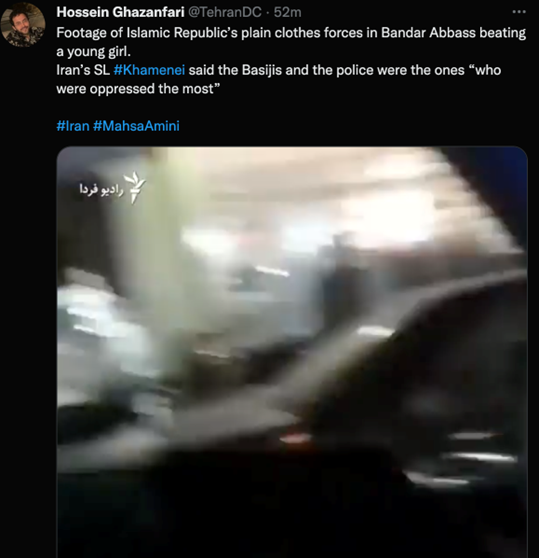 School children chanted “Death to the Dictator” in Marivan, Iran. 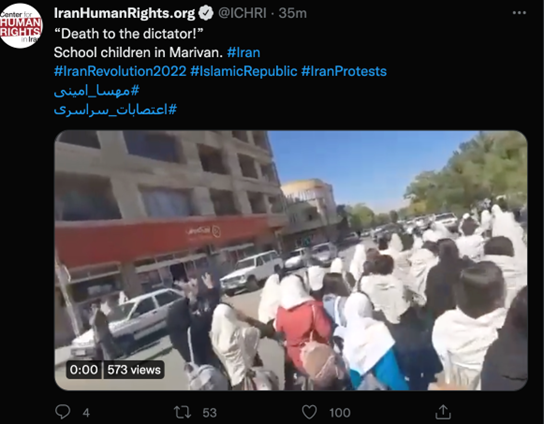 Israeli women gathered in Jerusalem in support of Iranian women. 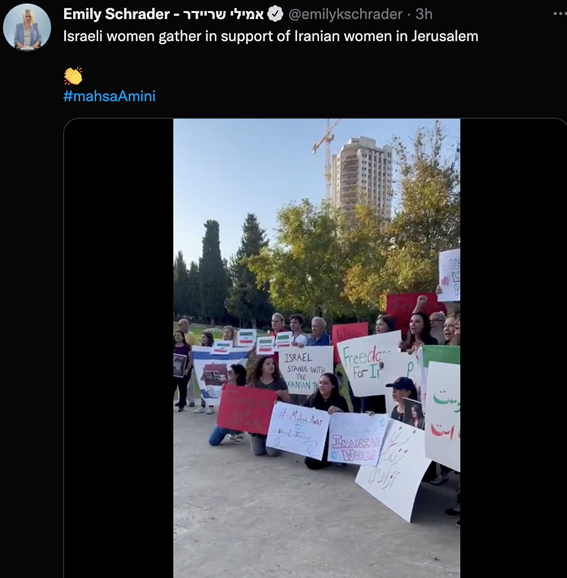 The mother of Nika Shakrami, a 17-year-old girl who died after joining the protests, accused Iran’s police of murdering her daughter. The authorities are pressuring her into making a false confession.

Nika Shakrami’s uncle was forced to denounce the protests on State TV.

U.S. Treasury Department levied new sanctions against Iranian officials today. The sanctions press release reads: “the U.S. Department of the Treasury’s Office of Foreign Assets Control (OFAC) is designating seven senior leaders within Iran’s government and security apparatus for the shutdown of Iran’s Internet access and the continued violence against peaceful protesters in the wake of the tragic death of 22-year-old Mahsa Amini.”

The EU condemned Iran for its repression of women’s rights protesters. A resolution urged the EU to sanction Iranian officials involved in the crackdown against protesters.