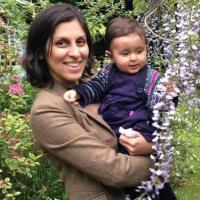 Nazanin was detained on April 3, 2016, at Tehran’s Imam Khomeini Airport by officials believed to belong to Iran’s Revolutionary Guards. She had traveled to Iran on March 17, 2016, to visit her family during the Persian New Year holiday. She was detained as she was about to return to the U.K., along with her toddler daughter, Gabriella.

Before being taken into custody, Nazanin was allowed to leave Gabriella in the care of her parents, who had accompanied her to the airport. The authorities confiscated Gabriella’s British passport initially, but it was eventually returned, and Gabriella left Iran for the U.K. in October of 2019.

Nazanin was taken to an undisclosed detention center in Kerman in southern Iran for interrogation and was held in solitary confinement for 45 days. Her family paid bail to keep her from being returned to solitary. On June 5, 2016, Nazanin was transferred from Kerman Prison to a ward controlled by the intelligence organization of the Islamic Revolutionary Guard Corps (IRGC) in Evin Prison. While in Evin, Nazanin briefly shared a cell with Homa Hoodfar, a Canadian-Iranian professor who was arrested in June of 2016 and released on September 26, 2016.

Since her arrest, Nazanin has been denied the right to access a lawyer and is feared to have been coerced into making “confessions.” She was allowed a meeting with her parents and daughter for the first time on May 11, 2016, in a hotel room in Kerman. The meeting, which lasted over two hours, took place in the presence of security agents. According to her husband, Richard, “When she met [her family] at that hotel, she wasn’t able to stand up she was so weak. She couldn’t walk without getting a blackout. She wasn’t able to pick up her baby, and our baby had to be put on her lap, she was so weak.”

Nazanin has been permitted to make several brief phone calls to family members in Iran and, intermittently, to her husband outside the country, and those were only to tell him she had stood trial and been sentenced to five years in prison. Authorities halted the phone calls to her family in Iran on June 5, 2016. In July 2016, her husband reported that she had lost weight, seen her hair fall out, and was virtually unable to walk.

In October 2016, her husband Richard told Amnesty International that his wife’s health had sharply deteriorated and that she was even contemplating suicide. She was suffering from heart palpitations in addition to pain in her hands, arms, and shoulders, and blurred vision. On November 13, 2016, Nazanin began a hunger strike to express her despair over the prospect of never being released.

On November 25, 2016, Nazanin told her family that IRGC officials had pressured her to choose between them moving their two-year-old daughter Gabriella into Section 2A of Evin Prison with her for up to three days a week, or Nazanin signing a document to say that she does not want “the right to be with her young daughter.”

In January of 2019, the British press reported that the IRGC had unsuccessfully tried to recruit Nazanin as a spy in exchange for her release. The Guards wanted her to spy on the U.K. Department for International Development and the Small Media Foundation, which describes itself as a “human rights research lab and information design studio.”

Nazanin went on a hunger strike in January of 2019 to protest her lack of medical care for multiple health problems, including neck pain, lumps in her breasts, and numbness in her arms and legs. She ended the strike when the prison authorities agreed to give her medical treatment.

Nazanin and her husband launched a joint hunger strike in June of 2019 seeking her unconditional release. The strike lasted 15 days, and Richard Ratcliffe spent it outside the Iranian embassy in London.

In July of 2019, Nazanin was moved to a hospital psychiatric ward. Her husband said she was put in de facto solitary confinement and chained to her bed for six days, after which the authorities gave in and transferred her back to prison.

Nazanin issued an unprecedented open letter in October of 2019. She pleaded for her release and claimed that “My child and I are the playthings of politicians, inside and outside our homeland, who have used us as tools to try to achieve their own political goals.”

Nazanin’s family and she herself expressed concern in February of 2020 that Nazanin had contracted the highly dangerous novel coronavirus, COVID-19. “I feel very bad in fact,” she said. “It is a strange cold. Not like usual. I know the kinds of cold I normally have, how my body reacts. This is different. I am just as bad as I was. I often get better after three days. But with this there is no improvement. I haven’t got one bit better.” She added that she had had a very sore throat and intermittent fever, as well as breathing difficulties and general pains and fatigue, and was not tested for the virus. A spokesman for Iran’s judiciary claimed that she was healthy and not suffering from COVID-19.

On April 27, 2016, the family was told that Nazanin was being held for “reasons related to national security,” without elaborating on further details and that she would likely be held for another two or three months until the completion of an investigation. Nazanin was subsequently accused of partaking in a plot to overthrow the Iranian government.

On June 9, 2016, Richard Ratcliffe said Nazanin telephoned her family in Iran informing them that she had been told she was going to be released, “and then, after she did that, someone called her parents and said: ‘there has been a mistake, we are changing things, and she is being transferred.’”

On June 15, the IRGC in the Kerman Province accused Zaghari-Ratcliffe of being a “top operative in a foreign network” who was participating in a “plot for the soft overthrow of the Islamic Republic.” An official IRGC statement in Iranian media accused Nazanin of attempting to overthrow the Islamic Republic as “one of the chief members of networks of adversary institutions who — with the direction and support of foreign media and espionage services — has committed her criminal acts over the past few years.”

On August 14, 2016, Nazanin faced a secret trial before the Revolutionary Court. On September 9, 2016, she was sentenced to five years in prison for undisclosed crimes. Nazanin appealed the sentence, but according to Richard Ratcliffe an Iranian Revolutionary Court dismissed her appeal in a secret session on January 4, 2017, though the decision was only announced on January 22, 2017.

During the appeal hearing, two new accusations were raised against Nazanin. These charges included the claim that she was knowingly married to a British spy, and that she acted as the head of recruitment for BBC Farsi at the time of its founding in 2009. Nazanin never worked for BBC Farsi and she had been to Iran on holiday many times without a problem since she left her role as Project Assistant for BBC Media Action in 2010.

In October of 2017, Tehran’s prosecutor general said Nazanin was imprisoned for directing “a BBC Persian online journalism course which was aimed at recruiting and training people to spread propaganda against Iran.” In December of 2017, Iranian state television said Nazanin was “found guilty of spying and spreading propaganda against the Islamic Republic.” Specifically, Nazanin allegedly ran “training courses for recruits at the BBC World Service Trust and the ZigZag Academy,” the latter of which engaged in “training and recruitment of human resources for the launch of BBC Persian Service and deployment of undercover reporters in Iran to gather intelligence.” Nazanin purportedly “identified potential Iranian recruits and invited them to attend the training courses, received and reviewed their resumes, managed financial affairs related to the courses in Malaysia and India, picked trainers, assessed the performance of the participants and managed the ZigZag Academy’s websites.”

Also in October of 2017, Nazanin’s family disclosed that at a hearing at Evin Prison, she was told that she was facing new charges, including “joining and receiving money from organizations working to overthrow the Islamic Republic, and attending a demonstration outside the Iranian Embassy in London.” The additional charges disqualified her from applying for early release and could tack on 16 more years in prison to her sentence.

A judge told Nazanin in July of 2018 that she would remain in prison until the British government repaid Iran a debt of almost $400 million for an unfulfilled military sale in the 1970s, implicitly reaffirming that the regime was holding Nazanin hostage as leverage to extract concessions from the U.K. In September of 2019, Iranian Foreign Minister Mohammad Javad Zarif said that in 2016, the British government offered to release those funds to Iran in exchange for Nazanin’s release, but British Foreign Minister Jeremy Hunt retracted the offer upon taking office in 2018.

As the novel coronavirus ravaged Iran in the spring of 2020, and particularly endangered inmates living in the appalling conditions of the Iranian prison system, the regime temporarily released Nazanin and tens of thousands of other prisoners. She left Evin Prison on a brief medical furlough on March 17, 2020, and placed under de facto house arrest. She is forced to wear an ankle monitor—for which her family had to pay a fee—and may not move more than 300 meters (less than one-fifth of a mile) from her parents’ home. (Reportedly, she is the only temporarily released political prisoner required to wear one.)

Her furlough originally was to end on April 4, but on May 20, Zaghari-Ratcliffe’s family tweeted that her medical furlough had essentially been extended indefinitely—until the regime decides whether to grant her request for clemency.

Since going public with the news of Nazanin’s arrest, her husband, Richard, has relentlessly campaigned for her freedom. He launched a petition calling for her release that has been signed by more than three million people as of March 2020.

A report from the United Nations Working Group on Arbitrary Detention (WGAD) strongly condemned the imprisonment of Nazanin. On October 24, 2016, petitions were delivered to the U.K. Foreign Office with a letter co-signed by 117 Members of Parliament and 24 Members of the House of Lords calling for the release of Nazanin along with two other British-Iranian citizens. The petition, signed by more than 73,000 supporters, was sponsored by Amnesty International.

The United Kingdom’s Foreign Office granted Nazanin diplomatic protection in 2019, which Iran has rejected. This move has raised the matter beyond a consular dispute and into a full bilateral legal dispute between Iran and Britain.

When the regime granted Nazanin a two-week medical furlough in March of 2020, British Foreign Minister Dominic Raab said that he was “relieved,” and urged the regime to make sure she received needed and now to release all UK dual nationals arbitrarily detained in Iran, and enable them to return to their families in the UK.”