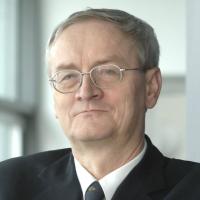 Dr. August Hanning was the former State Secretary in the Federal Interior Ministry of the Federal Republic of Germany in Berlin from 2005 to 2009 and Director Federal Intelligence Service (BND) from 1998 to 2005.

Dr. Hanning studied law in Münster (Westphalia) and Freiburg (Breisgau) in 1966. After obtaining his degree he became the fiscal authority of the state of North Rhine-Westphalia. After a short year he made a career switch to the Federal Ministry of the Interior. In 1986 he became a top diplomat and was assigned Head of the Division at Permanent Mission of the Federal Republic of Germany (West Germany) to the German Democratic Republic (East Germany) in Berlin. He was responsible for diplomatic engagements between the two sides.

In 1990 he continued his career at the Federal Chancellery and became Head of the Division, in 1994 he became team leader and in 1996 the Director-General. During his function of Director-General he was responsible for the coordination of the intelligence services of the federation. In 1998 he finally became the President of the German Secret Service, the Bundesnachtrichtendienst. After a career of 7 years he left his position and became for 4 years the State Secretary in the Federal Interior Ministry.