The Role of Classification Societies in Stopping Maritime Malpractice

It appears that many classification societies – which certify a vessel’s seaworthiness – are starting to heed last year’s official guidance on maritime malpractice and sanctions.

In May 2020, the U.S Coast Guard, State and Treasury Departments issued its “Guidance to Address Illicit Shipping Practices and Sanctions Evasions Practices.” This was an important document, especially in addressing the true bane of sanctions evasion at sea: the disablement of Automatic Identification System (AIS) tracking satellites.

In a section addressed specifically to classification societies, it advised that they consider:

Requiring contractual language that describes AIS disablement and manipulation inconsistent with SOLAS [International Convention for the Safety of Life at Sea] and activity prohibited by sanctions as of the contract date as grounds for termination of the contract and removal and denial of services. Additionally, parties could incorporate contractual language that prohibits transfers of cargo to clients that are not broadcasting AIS or have an AIS history that indicates manipulation inconsistent with SOLAS.

UANI has therefore written dozens of times to classification societies, alerting to them of instances in which vessels classified by them have engaged in this practice.

Some well-known classification societies include the American Bureau of Shipping, Tokyo-headquartered Nippon Kaiji Kyokai (Class NK), UK’s Lloyd’s Register, Paris-based Bureau Veritas, Norwegian firm Det Norske Veritas (DNV), Indian Register of Shipping (IRS), and Registro Italiano Navale (RINA).  These members are all part of the International Association of Classification Societies (IACS), the most prestigious ‘club.’ An IACS certification in particular grants vessels enhanced access to global maritime trade and provides an important layer of accountability upon which other maritime entities - flag administrations, marine insurers, oil traders, charterers and port authorities – rely. But regardless of whether a society is an IACS member or not, ‘declassification’ or non-classification should entail the revocation of insurance coverage and indeed the right to sail at all.

Overall, UANI’s campaign has led to the ‘declassification’ of 29 tankers identified as suspected of shipping Iranian cargo. Yet despite having their class withdrawn or suspended, these same tankers continue to traverse international waters – a situation that is of serious concern should any of these tankers be involved in a collision or oil spill. An additional 80+ tankers strongly suspected of having transported sanctioned Iranian oil or gas have retained their classification, despite UANI relaying our concerns to the relevant societies.

For example, Bureau Veritas has responsibly withdrawn the class for a total of seven vessels that UANI has brought to their attention. In one reply, Bureau Veritas wrote, “Further to a thorough due diligence process of the ownership and activity of these vessels, it was decided, in line with our procedures, to terminate contracts binding us to these vessels even in the absence of any OFAC listing.” Similarly, DNV GL has withdrawn the class for eight vessels that UANI highlighted.

However, of these 15 vessels that had their classification withdrawn, six are now being classed by other IACS members.

Clearly, it is unfair that only some societies take the responsible route to declassify vessels that are switching off tracking satellites against all maritime rules, while the others among them simply pick up the business and enable the regime to continue exporting its most lucrative yet illicit resource around the world. 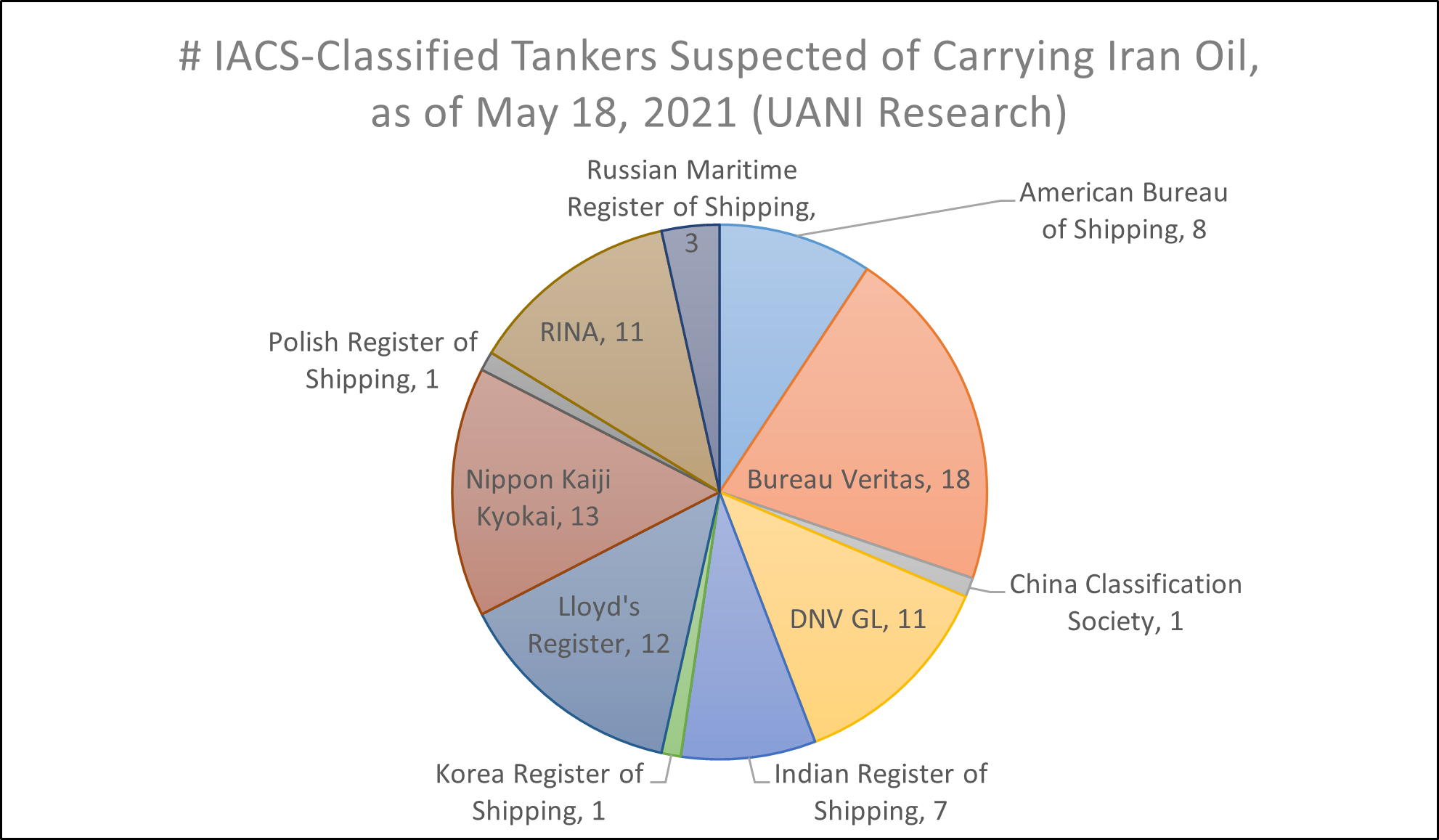