New York, NY – United Against Nuclear Iran (UANI) today announced the launch of a new campaign intended to encourage the Trump Administration not to grant sanctions waivers for businesses interested in engaging with Iran following the second reimposition of sanctions on the world’s leading state sponsor of terrorism. UANI launched the “Maximum Pressure” campaign with a full-page ad running in today’s print edition of The Hill newspaper. 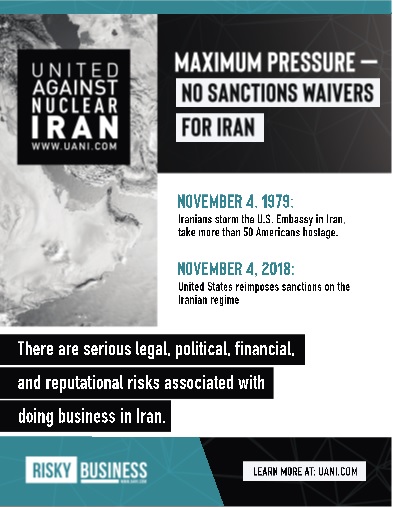 “Since the founding of our organization, we have worked to encourage businesses around the world to stop engaging with Iran, the world’s leading state sponsor of terrorism.  While the Trump Administration made the right decision to withdraw from the existing Joint Comprehensive Plan of Action (JCPOA), the Maximum Pressure campaign is intended to ensure that they do not grant sanctions waivers for U.S. businesses reluctant to withdraw from Iran,” said UANI President David Ibsen.